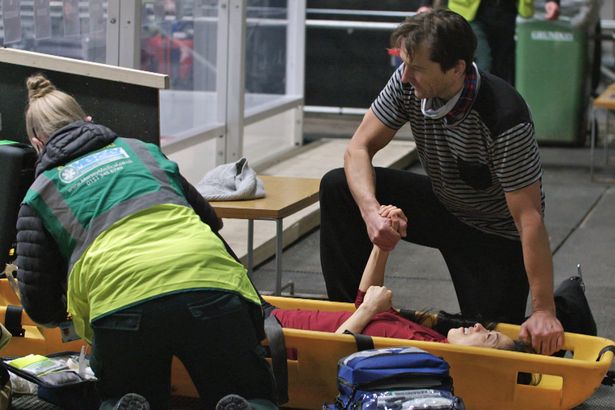 Dancing on Ice has been plagued by tragedy, misfortune and accidents this year.

The greatest show on ice has melted amid a crisis of epic proportions – with the show being taken off air this weekend due to an injury crisis.

The production team and cast have valiantly struggled through during incredibly challenging times, but the decision was made to take a break for a week to allow the stars to recover.

It’s not something show bosses have taken lightly, as many celebrities have already been booted out of the competition because of the strict rules stating they can only miss two weeks on the ice.

There’s been a heartbreaking family loss, positive Covid tests and a whole host of horrifying injuries.

Here is a look at how this ‘cursed’ series unfolded.

The former Coronation Street star will now be partnered up with Dancing on Ice legend Matt Evers, who was originally with Denise Van Outen before her horror injury.

Faye is glad to still be skating but gutted that she won’t be able to skate with Hamish again.

Praising her former partner Hamish, Faye wrote: “It’s not the end of my journey it’s just a change of direction…

“I had the honour of being taught how to skate by the one and only @hamishgaman and with all the skills & knowledge that he so kindly gave to me I now get to begin a whole new chapter with @themattevers. Who’s Ready?”

*Dancing on Ice will continue next Sunday on ITV at 6pm