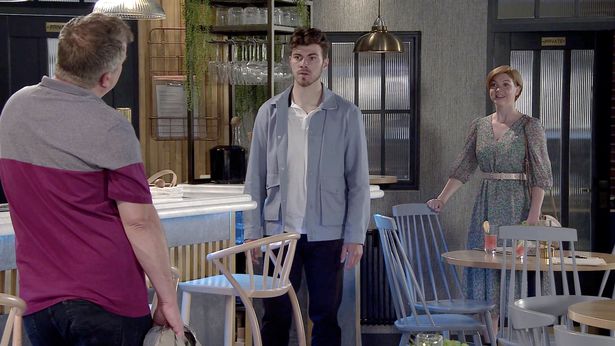 Coronation Street aired a twist for Curtis Delamere on Monday night, as he confided in Steve McDonald about his heart condition.

The character was forced to reveal his health diagnosis after it emerged he was hiding something from girlfriend Emma Brooker.

Her dad Steve confronted him over his weird behaviour, believing his daughter was being betrayed.

What he was not expecting though was that Curtis was suffering with a heart condition that he was yet to disclose to anyone on the street.

In the first of two visits to Corrie on Monday, Curtis was heard telling a mystery woman that he could drop dead at any moment.

Another said: “Curtis has a life threatening condition then.”

A third added: “Not Curtis with a life threatening illness? Why did Corrie want to do this to such a sweet couple in Emma and Curtis?”

A horrified Steve asked: “Is there nothing they can do for you?” to which he replied: “Nothing yet, it’s a heart condition that’s all they know.”

On his outlook he said: “No one knows, I could have a totally normal life span or you know, any place, anywhere…”

He added: “My heart has stopped a couple of times. In layman’s terms I was dead… I don’t recall anything until after the medics brought me back round.”

Curtis said there was no knowledge on how he might be saved, or if his life would be shortened but he remained hopeful.

He urged Steve to keep the news from Emma, saying he would rather her hating him than grieving him down the line.