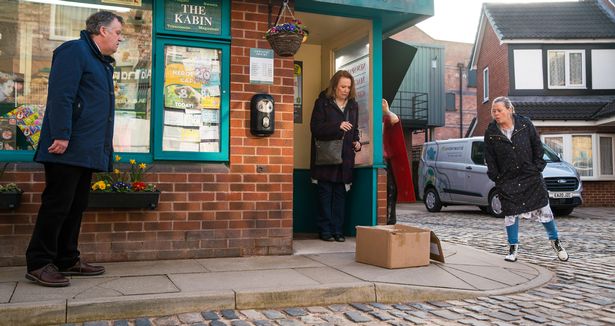 A wedding should usually be a happy affair, but a dark cloud hangs over Peter and Carla as they gear up for their big day.

Next week on Coronation Street, Peter’s health takes a worrying turn ahead of their vows – will they get the chance to say ‘I do’?

Elsewhere, a family continues to be ripped apart as even more secrets emerge from the shadows.

And two star-crossed (er – well, kind of) lovers hide their true feelings for one another as the Weatherfield residents stand firmly in the other hurt party’s corner.

Cathy Matthews will leave the cobbles after the abuse she receives for her online comment proves to be too much.

The newsagent owner, played by Melanie Hill, finally admitted this week that it was her, rather than partner Brian, who left the nasty comment after Tracy refused to let her help with Steve’s fundraising.

But next week, she will feel the full wrath of the Weatherfield residents as she receives a death threat in the post.

On Monday, Cathy, Brian and Bernie celebrate her birthday at Speed Daal, but when they return Cathy receives a call from Dev telling her that it would be better if she stayed away from the kebab shop until the anger died down.

Michael tells Ed that he did a DNA test, and Ed is hurt that he and Ronnie went behind his back.

Michael confronts Ed over his gambling, and Ed admits he simply did not want to come home as he finds it too painful to be in the same house as Michael at the moment.

Having found out from Aggie that Ed has taken £1k out of their bank account, Michael and James head out to search the bookies and casinos for their Dad…