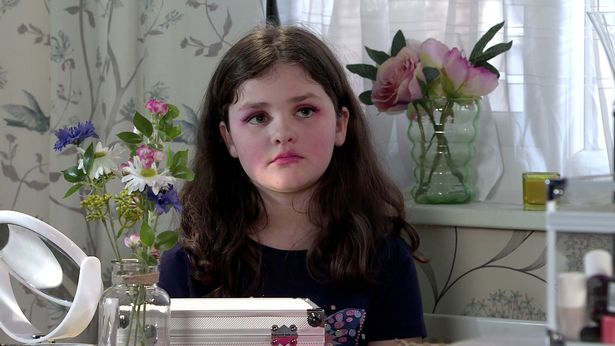 Mischief-maker Hope, played by Isabella Flanagan, was dolled up to the nines thanks to an uber glam makeover by the Underworld telesales agent, who is played by actress Ruxandra Porojnicu.

On Monday night’s episode, the 10 year old persuaded former nail technician Alina to transform her looks completely, including a face full of make up and false eyelashes.

However a fuming Fiz, played by Corrie stalwart Jennie McAlpine was less than impressed and read Alina the riot act.

“What’s that muck on your face” she fumed as the agent informed her: “We did makeovers, aren’t we pretty?”

Ruxandra’s character was involved in a human trafficking storyline however it was a little too close to home for the actress, who found herself in a similar situation when she first moved to the UK.

Ruxandra, arrived from Romania with just £300 when she was just 21 with dreams of a better future.

Comparing Alina’s exploitation to her own experience, she said: “What really helped me at the beginning was the fact I kind of found myself in Alina’s situation when I moved to the UK.

“I came with big dreams. I just wanted to work for a better future. I was a bit naive. I wouldn’t think to sign a contract.”

The actress also met up with Princess Eugenie to discuss her storyline.

Ruxandra said: “She was so lovely. I was a bit overwhelmed. She was really nice. She was asking me about the storyline and how I found it. She asked me when it was going to be on TV.”