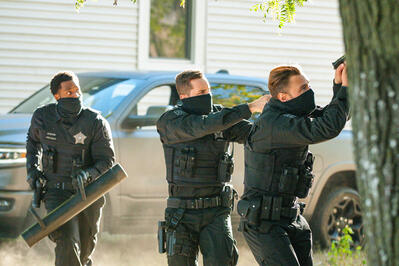 It may have taken longer than usual, but new episodes of Chicago P.D. are finally within sight! With Season 8 set to premiere on Wednesday, Nov. 11, it won’t be long until Intelligence is back at it.

The crew faces a new challenge this season with the arrival of Deputy Superintendent Samantha Miller (Nicole Ari Parker), a no-nonsense advocate for police reform. Given that Voight (Jason Beghe) isn’t one to play by the rules, it’s inevitable that he and Miller will butt heads at some point this season. And while they might not agree on a lot of things, showrunner Rick Eid says their relationship won’t be hostile.

“They will definitely butt heads, but these two actually like and respect each other,” Eid told TV Guide via email. “Their relationship is antagonistic but cordial. Unlike the other bosses in Voight’s life, Nicole’s character actually wants Voight to succeed.  She views him as an ally.”

As the department adjusts to doing things differently, Voight will attempt to change right along with it. However, following the rules won’t be easy for a guy who’s used to handling things his own way. “He wants to evolve, but it’s not as easy as it sounds. Following the rules isn’t his strong suit but things are different now.  He can’t do things the way he once did,” Eid added.

The new season will also see Atwater (LaRoyce Hawkins) going up against his cohorts in blue after reporting Doyle, a racist but well-liked cop, for racially profiling a black man and instigating the shootout that resulted in his death. Eid teased a journey “rife with danger and conflict” for Atwater, which was alluded to at the end of last season when he found himself surrounded by a sea of police cars flashing their blue lights.

With Voight considering a different approach to policing and Atwater poised to take on the Blue Wall, it’s clear that police reform will play a major role in Season 8. This comes in the wake of recent criticisms about how police procedurals like Chicago P.D. portray its officers and their often-violent approach to interrogating suspects following national protests against police brutality. According to Eid, Intelligence will take a different approach to policing in light of these circumstances.

“We try not to glorify our characters. Rather, we try to represent them in an honest and realistic way. Having said that, the world is changing and the way they police will change as well,” Eid explained. “We definitely have listened to and tried to learn from these various conversations. We’re hopeful that this season’s episodes will reflect the current state of our society in an honest and realistic way,” he said.