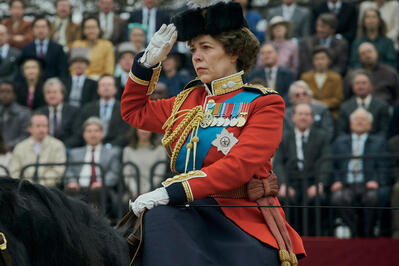 Looking for something new to watch on Netflix? You’ve come to the right place. Here are the best new shows and movies releasing on Netflix the week of Nov. 13-20, 2020.

I hope you like royalty and Christmas, because this week, that’s almost all Netflix is about. There are a couple offerings about princesses, and a trio of options kickstarting the Christmas spirit, with one movie covering both subjects courtesy of multiple Vanessa Hugdenses. Yep, Christmas has come early. Aside from that, it’s another mellow week for Netflix. Is Netflix purposefully slowing down its releases as we near the holidays or is it running out of content? If it is indeed running out of content, then it’s time to resupply the end-of-the-world bunker and stock up on shotgun shells, because we’ll all lose our minds.

All titles debut on Friday, Nov. 13 unless otherwise noted. Here’s what came out on Netflix last week.

Hail to the Biggest Royal Releases

The Crown, Season 4
Season 4 is already being hailed as the best season of the decadent drama so far as Queen Elizabeth (Olivia Colman) butts heads with prime minister Margaret Thatcher (Gillian Anderson) and the series enters the glorious 1980s. But the biggest addition to the cast of characters is Princess Diana (Emma Corrin), who will wed Prince Charles (Josh O’Connor) this season. This is Colman’s last season as the queen; Imelda Staunton will take over the role in the final two seasons of the series. (Sunday, Nov. 15)

The Princess Switch 2: Switched Again
Are you ready for another round of Vanessa Hudgens’ American-doing-an-English accent? Well you’re getting it anyway. The holiday rom-com flick returns with a sequel in which a regular woman once again trades places with a lookalike Duchess so that they can each pursue romantic relationships with men who do not know who they actually are because this is a movie and that’s how things go in these types of films. But wait, there’s more! Since this is a sequel, a third lookalike, the Duchess’ conniving cousin who is also played by Hudgens, is thrown into the equation to muck things up. It’s like Orphan Black but for tweens who love Christmas and princesses. (Trailer / Thursday, Nov. 19)

We Are the Champions, Season 1
Boo on normie sports! Rainn Wilson (The Office) narrates this exotic sports docuseries that covers unusual competitions from around the world like frog jumping and hot chili pepper eating. The series walks that balance of tone between “OMG this is a real sport wut?” and some great personal stories of the athletes competing, making it good times all around. I’ve watched most of it, and the cheese rolling episode is phenomenal. (Tuesday, Nov. 17)

Jingle Jangle: A Christmas Journey
Christmas will continue to be shoved down your throat until tinsel is shooting out of your ears with this family-friendly musical fantasy film starring Forest Whitaker as an inventor named Jeronicus Jangle who makes magical toys. Do you really need to hear more? (Trailer)

The Life Ahead
Screen legend Sophia Loren stars in this Italian film about a Holocaust survivor who takes in a young Senegalese refugee after he tries to rob her and boy oh boy I think that covers all the bases on the field of topical drama. (Trailer)

The Minions of Midas, limited series
This Spanish film is based on a Jack London story of a wealthy man who is told by a secret organization that if he doesn’t pay up, someone will randomly be murdered. Things get complicated because as we all know, rich people don’t like to give up their money even when lives are on the line. (Trailer)

Ainu Mosir
A visually kick-ass coming-of-age story from Japan about a young teen who must decide between maintaining the traditions of his family with being a young adult. (Trailer / Tuesday, Nov. 17)

The Boss Baby: Back in Business, Season 4
The Boss Baby is CEO now, so as the company goes, he goes. (Trailer / Tuesday, Nov. 17)

Kevin Hart: Zero F**ks Given
Comedian Kevin Hart tries to make people laugh. Will he? Tune in to find out. (Trailer / Tuesday, Nov. 17)

Bitter Daisies, Season 2
Season 1 of this Spanish crime series following a cop tracking down the murderer of a teen girl came out in 2018, so this better be good. (Trailer / Wednesday, Nov. 11)

Holiday Home Makeover with Mr. Christmas, Season 1
Some dude who is Christmas Crazy goes around throwing holiday cheer all over people’s houses in this reality series. (Trailer / Thursday, Nov. 19)