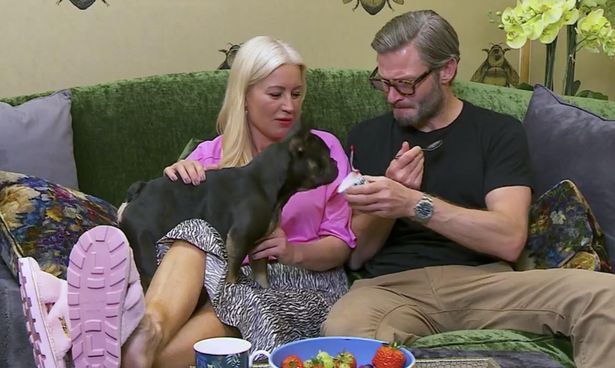 Star of Celebrity Gogglebox Eddie Boxshall grossed out viewers on Friday evening by continuing to eat a tub of ice cream after he and partner Denise Van Outen’s dog had licked it.

Denise had bought some desserts made specially for dogs, and Eddie offered to try out one of the tubs of ice cream before giving it to the dog.

The couple were surprised to discover the ice cream wasn’t the flavour you’d expect.

As Eddie tentatively tried the frozen treat, Denise asked: “What flavour is it? Please tell me it’s tuna or something.”

The special canine pudding proved so tasty that Eddie wasn’t able to resist having another sample even after the couple’s dog had stuck her tongue into the pot.

Fans of Gogglebox were delighted to discover that Denise and Eddie were returning for another series on the popular show, which would be filmed in their Essex home.

The pair first met in 2014 on a blind date set up by a mutual friend.

After getting engaged, they decided to break a little with tradition by choosing wedding bands instead of an engagement ring.

Denise and commodities trader Eddie have chosen to push back their wedding until 2023.

The star of Dancing On Ice told The Sun: “It will definitely happen but we’re not in a rush.

“We’re both getting back to work now with everything opening up and it’s just finding the time, as we want it to be a big day and that takes a lot of planning.

“We don’t want a small wedding. We want a big group of people and a big party with no restrictions.”

Celebrity Gogglebox continues next Friday at 9pm on Channel 4