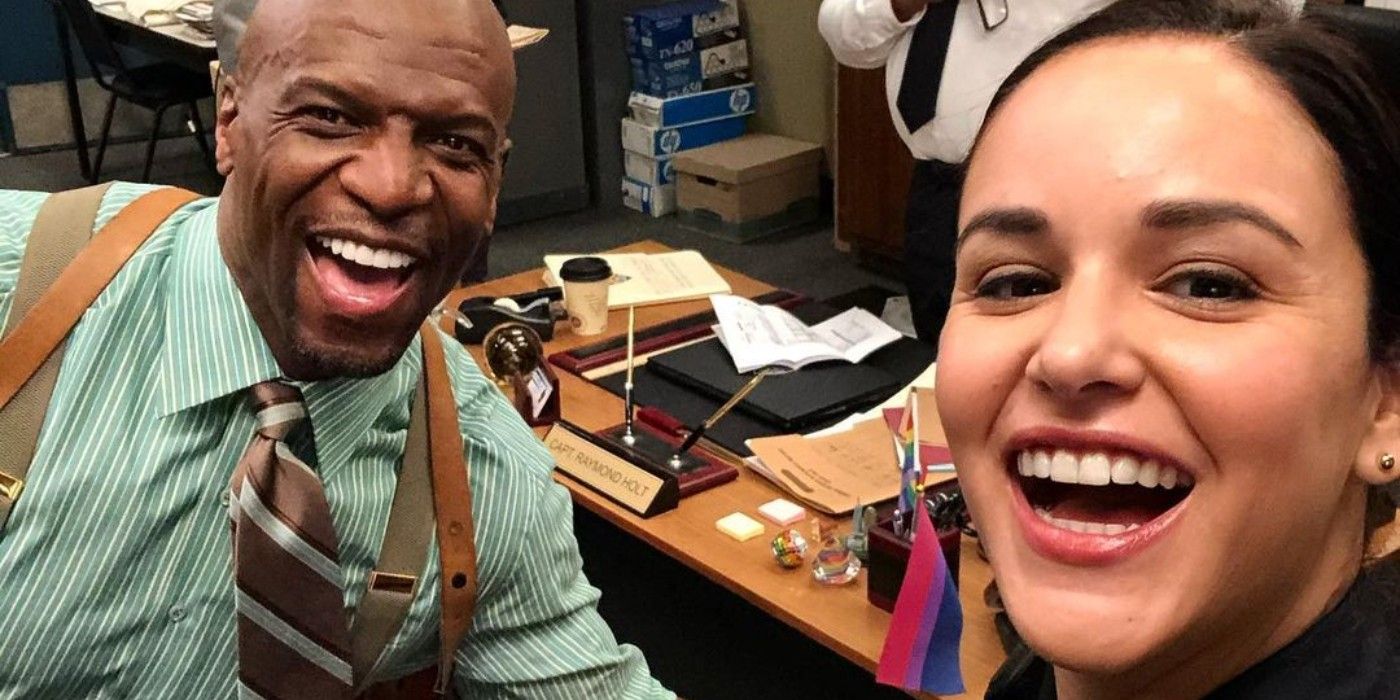 Work on Brooklyn Nine-Nine season 8 – which will also be its last – has officially begun, as confirmed by star Melissa Fumero in a new set photo. The beloved workplace comedy first began in 2013 on Fox and was met with a wave of critical praise. Since then, it has become a fan favorite show, even after it shifted homes from Fox to NBC after season 5. Brooklyn Nine-Nine follows the lives of the detectives who make up Brooklyn 99th’s precinct as they solve crimes, carry out Halloween heists, and get up to other crazy shenanigans.

Brooklyn Nine-Nine was last on the air in the spring of 2020, and its latest season has taken longer than usual to arrive. As has often happened with television shows in the past year, production on season 8 was affected by the coronavirus pandemic. Then, when last year’s Black Lives Matter protests ushered in a cultural reckoning for how Hollywood portrays cops, Brooklyn Nine-Nine scrapped its early scripts in order to reframe their season. All of these delays and creative restructurings has culminated in the news that season 8 will be Brooklyn Nine-Nine‘s last.

After all this time, Brooklyn Nine-Nine has begun filming season 8. Work actually began on Tuesday, but cast members have only just begun posting about it. Melissa Fumero, who plays straight-laced Amy Santiago, shared her excitement about being back on set by posting a picture of her and co-stars Terry Crews and Andre Braugher. “Ba ba ba back in the Nine Nine!!!!” Fumero wrote. “Yesterday, I was so excited to be back at work I forgot to take a pic to commemorate the occasion so here’s from Day 2.” You can see her full post down in the space below.

Brooklyn Nine-Nine season 7 ended with Amy giving birth to son McClane “Mac” Peralta, her son with husband Jake (Andy Samberg). Though it has yet to be confirmed, the new episodes could see Jake and Amy coping with raising a child while working their dangerous jobs. As was previously mentioned, Brooklyn Nine-Nine season 8 will confront real life events like the Black Lives Matter protests, and it remains to be seen how exactly it will integrate this important topic. The final season will consist of only 10 episodes, so every minute counts.

Brooklyn Nine-Nine has long been considered one of the best comedies on broadcast television, and hopefully season 8 will allow it to go out on a high note. It has undoubtedly been difficult for the writers to navigate the many challenges facing these last episodes, but it will be a thrill to see the members of the Nine-Nine on the small screen one last time. Brooklyn Nine-Nine has always been one of the rare shows to feature diverse, healthy relationships, and it will be sad to see it go. Luckily, it isn’t goodbye just yet, and as Fumero pointed out in her set picture, there are still plenty of reasons to smile.