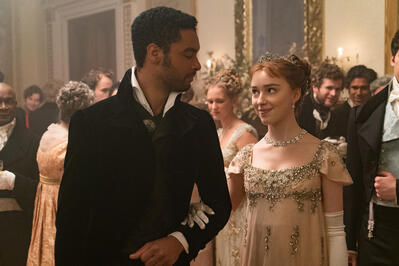 The first episode of Bridgerton, the new Netflix period drama about high society in London, wastes little time showing that it’s a Shonda Rhimes-backed series — there are dramatic cliffhangers, scandalous romances, and gossipers galore. It is catnip for fans of the mega-producer’s hugely popular series like Grey’s Anatomy and Scandal. But this adaptation of Julia Quinn’s novels seeks to also rejuvenate the British costume genre, in part by incorporating sweaty, sometimes front-lawn sex, presumably to prove that those stuffy flared gowns and well-tailored suits can and do easily slither off their bodies when the time is right.

In fact, much of Bridgerton will play like an exercise in pearl clutching or eyebrow raising, depending on the audience. At the center of this romp is the interracial romance between Daphne Bridgerton (Phoebe Dynevor) and Simon Bassett (Regé-Jean Page), a young debutante and the Duke of Hastings, respectively, whose affair is much-discussed not for the fact that he’s Black and she’s white but because, like for every other character on this show, it’s someone else’s business. Curiously, showrunner Chris Van Dusen chose to adapt the series with a mixed couple with almost nary a mention of race in 1813 London.

It’s an interesting decision, especially held up against the albeit more modernized reflection of Blackness in the United Kingdom in director Steve McQueen’s Small Axe series, where Black British people are struggling to reclaim their own humanity on a daily basis. But Bridgerton goes out of its way to present a world where that struggle doesn’t exist, which may just turn away some viewers. For those who come for the Shondaland aspect of it all, though — a landscape that is at best aspirational and at worst mythical — they will be smitten with the series’ relentless escapism.

With aspects of race swept to the side, Bridgerton centers itself on the feverish preparations of an upcoming ball where single women like Daphne can be paired with potential husbands. Because she’s a member of a filthy rich, high-profile family, hence the series’ title, there is immense pressure for her to be married off — and, of course, there are a number of suitors vying for her attention. But it’s Simon who ultimately catches her eye, in part because he is devastatingly handsome and in part because he’s emotionally unavailable.

Just before Bridgerton teeters toward the omnipresent trope of romanticizing the toxic male ego too cool for love, it explores Simon’s life more deeply, revealing one filled with suppressed shame and dishonor stemming from a challenging childhood and relationship with his father. But that is all it takes to stir up some scuttlebutt about when Simon will stop dragging his feet and propose to Daphne.

That’s also thanks to Lady Whistledown (voiced by Julie Andrews), the series’ narrator, who is akin to today’s National Enquirer in that she has all the juicy details on the inner workings of each character’s personal life mysteriously published in a newsletter that they eagerly devour. And like any addictive soap opera-adjacent narrative, we watch as they become increasingly invested in “news” that is not their own.

Meanwhile, there’s more chatter to be had about Daphne’s brothers, especially Anthony (Jonathan Bailey) and Benedict (Luke Thompson), both single and making unseemly romantic choices and bringing shame to the family name. As much as Bridgerton aims to be progressive, it doesn’t dare portray a high-caliber British family untethered to societal demands and their own reputations. It’s still peripherally obligated to some sense of reality.

That opens the story to Marina Thompson (Ruby Barker), one of a handful of Black characters on the show, reeling from her own humiliation as part of a family that’s eager to marry her off for reasons that are entirely different from Daphne’s. It’s a puzzling storyline that never quite feels satisfying, as it places her in the middle of a largely white extended family that leaves her virtually unguarded in front of the judgmental Genevieve Delacroix (Kathryn Drysdale), a particularly gossipy dressmaker by way of France. The contention between the two women only makes the fact that Marina has no real allies even more pronounced on a series that demands every character have at least one person sincerely rooting for them, or else they are ravaged by society. Marina doesn’t have much of a safety net.

Bridgerton has no qualms about who audiences should be focusing their attention on, supporting characters be damned, apparently: Daphne and Simon. The series is, at its core, about their romance, as it painstakingly subverts the archaic gender roles and constraint associated with the genre and infuses it with relatively progressive feminist notes, as well as a flair that comes not only from the plot but also from Sara Fischer’s lush production design.

But Van Dusen and his team seem to bite off more than they can chew by giving each of their characters, brought to life by a charming cast, a hefty storyline that in some cases is flayed by the end of the season. That’s compounded by its melodrama, which may attract those with a specific palate for this kind of fare, like Downton Abbey and The Crown, even with its flaws, but others may not be able to get past its foibles to enjoy the operatic escapades. Bridgerton is ultimately extravagantly decent.