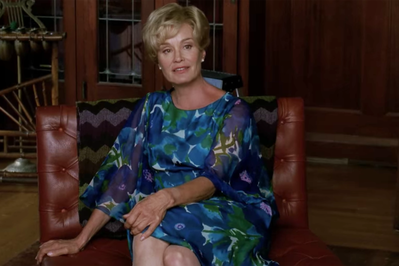 Since its premiere in 2011, American Horror Story has been one of FX’s most popular series, drawing in celebrated talent — including Jessica Lange, Kathy Bates, Angela Bassett, and even Lady Gaga — and racking up awards, including 16 Emmys and two Golden Globes. It only makes sense that Murphy would want to capitalize on AHS‘s success, and if we’re being honest, we’re pretty shocked it took nine years for this to happen!

As if news on the flagship series wasn’t already hard enough to come by, details about the possible spin-off are even more scare at the moment. But we’ve rounded up everything to know so far about the AHS offshoot below.

The first poster has been revealed. Because Murphy loves to keep us on our toes, the first art for American Horror Stories was unveiled just one day after the American Horror Story Season 10 art was released. In this poster, we see a woman with a cracked face and a black widow spider crawling in her skull, and the spider’s red design matches the red stain on the woman’s mouth. Murphy hasn’t given many other hints about this new series just yet, but he did say on Twitter that it will delve “into horror myths, legends, and lore.”

You didn’t think that was it, did you? pic.twitter.com/7CzOZSMXqU

It’s going to have a different format than AHS. Unlike American Horror Story, which tells one story across each season, American Horror Stories will consist of hour-long, self-contained episodes, per Murphy’s Instagram post. Per Deadline, sources have reported that each episode will specifically be “a standalone ghost story,” so if you were hoping American Horror Stories would mean more room for Murphy and the team to move away from specters and finally give us some good alien horror, you maybe be in for some disappointment.