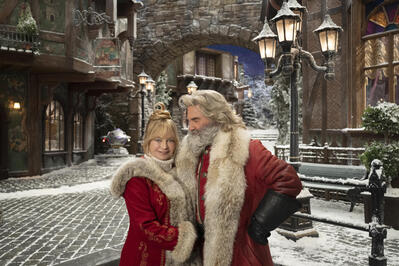 Looking for something new to watch on Netflix? You’ve come to the right place. Here are the best new shows and movies releasing on Netflix the week of Nov. 20-26, 2020.

This week, a Vanity Fair article went viral in the small world of TV critics for suggesting that TV has become intentionally mediocre, primarily existing in order to keep streaming services stocked with a fresh flow of content that subscribers can watch passively for hours at a time. And looking at Netflix’s offerings this week, it’s hard not to feel that cynicism — although to be fair, the article was about scripted TV, and Netflix is only releasing one scripted series this week and it’s not English-language, which is exceedingly rare. Four of this week’s releases are holiday movies. It’s a rough month for people who have no interest in watching Christmas movies.

All titles debut on Friday, Nov. 20 unless otherwise noted. Here’s what came out on Netflix last week.

Hillbilly Elegy
Ron Howard directs this awards-bait adaptation of Yale-educated venture capitalist J.D. Vance’s bestselling and controversial memoir about growing up as a poor white person that frames poverty primarily as a personal failing rather than a structural problem. No matter what your politics are, though, the movie is pretty bad, with a scenery-chewing performance by Glenn Close that’s obviously trying to get her an Oscar nomination. She puts on uglifying makeup and a garish accent and berates her grandson (Owen Asztalos) into making something of himself. It’s a transparent attempt at earning an Oscar nomination made even more transparent by the badness of the movie. We gave it a 1.5 out of 5. [Tuesday, Nov. 24]

The Christmas Chronicles 2
America’s first couple Kurt Russell and Goldie Hawn return as Santa and Mrs. Claus in this rare sequel that has a more prominent director than the first installment. Chris Columbus, who directed the first two Harry Potter movies and produced the first Christmas Chronicles, sits down in the director’s chair for this one, which follows siblings Kate (Darby Camp) and Teddy Pierce (Judah Lewis) as they help the Clauses save Christmas again, this time from a Kiwi mall punk-looking kid named Belsnickel (Julian Dennison) who controls some sort of werecat. It looks pretty bombastic. [Trailer / Wednesday, Nov. 25]

Dolly Parton’s Christmas on the Square
Coronavirus vaccine research funder Dolly Parton contributed 14 original songs and stars in this holiday musical, alongside Christine Baranski, Treat Williams, and Jenifer Lewis. Baranski plays Regina Fuller, a Scrooge who plans to sell the land her hometown sits on to a real estate developer, which means evicting everyone who lives there. On Christmas Eve. Dolly plays an angel whose visit helps Regina learn the true meaning of Christmas. If you want to watch a frivolous Netflix Christmas movie, you could do a lot worse than this. [Trailer / Sunday, Nov. 22]

Shawn Mendes: In Wonder
This documentary about 22-year-old Canadian sensitive pop singer Shawn Mendes looks impossible to watch if you’re not already in love with Shawn Mendes. No disrespect to Shawn Mendes, who is very popular and handsome and seems like a nice if self-serious young man, but watching him glossily talk about embracing imperfection onstage seems like the most boring thing in the world. [Monday, Nov. 23]

Alien Xmas
I watched the trailer for this 42-minute stop-motion animated special about a kleptomaniac alien who learns the gift-giving spirit of Christmas from Santa Claus and friends and couldn’t tell if it was a tongue-in-cheek parody of Rankin & Bass Christmas specials or a sincere attempt to capture their style and spirit and update it for 2020. I looked into it a little more and saw it was made by stop-motion superstars the Chiodos Bros. The brothers’ body of work includes designing the puppets for Team America: World Police and numerous contributions to The Simpsons. My assumption is that there will be satirical winks to grown-up viewers that will go over kids’ heads, but kids won’t notice or care because they’re enjoying the cute alien and goofy gags. [Trailer]

If Anything Happens I Love You
Two grieving parents mourn and try to carry on after the tragic loss of their daughter in a school shooting in this lovingly hand-drawn short. It’s 12 super-sad minutes. [Trailer]

Voices of Fire
In this docuseries, executive producer Pharrell Williams helps his uncle, a bishop in Hampton Roads, Virginia, try to assemble the world’s greatest gospel choir. Pharrell is using Netflix’s money to help his family, and you know what? That’s fine.  [Trailer]

Dragons: Rescue Riders: Huttsgalor Holiday
Kids can start to learn about how a lot of Christian traditions are adaptations of pagan beliefs with this Dragons special, which is about “Odinyule,” the Viking holiday of giving. Because if there’s one thing the Vikings were known for, it’s their generosity. Anyway, if your kids like Paw Patrol, they might like Dragons: Rescue Riders. [Trailer / Tuesday, Nov. 24]

El Cuaderno de Tomy/Notes for My Son
This Argentinian movie is about a woman with terminal cancer who writes a notebook for her four-year-old son to remember her by, and it becomes a sensation when it’s turned into a book for the life lessons it contains. The movie features Carla Quevedo, who co-starred in the underrated 2015 HBO miniseries Show Me a Hero opposite Oscar Isaac. She was very good in it, but her career in America didn’t take off and she returned to Argentina. Hi, Carla! It’s nice to see you! [Trailer / Tuesday, Nov. 24]

Wonderoos
Netflix describes this as “An adventurous and lovable team of young animals from all over the world play, laugh, sing and learn together to solve relatable preschool firsts.” I’m gonna have to take their word for it, because there’s no trailer. [Tuesday, Nov. 24]

The Great Pretender, Season 2
It’s an anime about con artists. People like it enough to make TikTok memes about it. The memes are as inscrutable to outsiders as anime itself. [Trailer / Wednesday, Nov. 25]

Mosul
This gritty Arabic-language action movie follows the Nineveh SWAT team, who fought ISIS in the Iraqi city of Mosul during ISIS’ occupation. It’s based on a true story, and a rare Middle East-set war movie where the heroes aren’t American soldiers, it’s the local security forces. [Trailer / Thursday, Nov. 26]