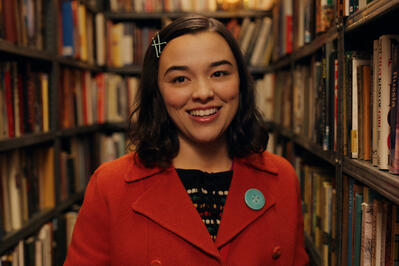 Looking for something new to watch on Netflix? You’ve come to the right place. Here are the best new shows and movies releasing on Netflix the week of Nov. 6-12, 2020.

It’s a pretty light week on the ol’ Flixter, with twelve new titles, none of which seem like blockbusters. But YA rom-com series Dash & Lily looks cute, adult animated war miniseries The Liberator looks cool, and the usual mix of international fare, kid stuff, and random odds ‘n’ sods looks pretty good. A quiet week, but a solid week.

All titles debut on Friday, Nov. 6 unless otherwise noted. Here’s what came out on Netflix last week.

Dash & Lily, Season 1
Ah, to be young and beautiful in a fetishistically idealized New York City at Christmastime and carrying on an extended courtship with someone you’ve never seen in real life via notes exchanged in a secret notebook at the Strand bookstore. A thing like that could go very wrong. But by the end of the trailer, Dash (Austin Abrams) and Lily (Midori Francis) have already worked it out. This romantic comedy is based on a young adult book series called Dash & Lily’s Book of Dares. It’s going to make 14-year-olds who watch this decide they want to go to college at NYU. (Tuesday, Nov. 10)

The Liberator
Veteran’s Day will see the release of this four-part World War II animated limited series. The most notable thing about The Liberator is its animation technique, which is a new technology called “Enhanced Hybrid Animation,” a combination of CGI and live-action that’s similar to rotoscoping. Bradley James stars as Felix Sparks, an Army officer who plays by his own rules as he leads his men in a 500-day campaign to liberate Europe. It looks like it will be epic on a scale that wouldn’t be possible in a live-action series without spending more than a hundred million dollars. (Trailer / Wednesday, Nov. 11)

Citation
A university student creates a big moment with national consequences when she accuses a prominent professor of rape in this Nigerian film that’s based on true events. (Trailer)

Country Ever After, Season 1
Country singer Coffey Anderson and his hip-hop dancer wife Criscilla star in this family reality series about raising kids and overcoming obstacles from the perspective of a country boy in the big city. (Trailer)

The Endless Trench (La trinchera infinita)
An anti-fascist activist in the Spanish Civil War hides in a hole underneath his house for 33 years with his wife’s help in order to avoid being killed by Franco’s men. This is Spain’s submission for next year’s Academy Awards. (Trailer)

Undercover, Season 2
This Dutch-language crime drama is back for a second season with even higher stakes, as undercover agent Bob Lemmens infiltrates an illegal arms-dealing ring. This is what crime is like in Belgium. (Trailer / Monday, Nov. 9)

Trash Truck, Season 1
This cute, gentle, and beautifully animated kids’ series follows the adventures of a boy named Hank and his best friend, a sentient garbage truck. This one’s for all the little kids who are obsessed with big trucks. (Trailer / Tuesday, Nov. 10)

A Queen Is Born (Nasce uma Rainha)
Brazilian drag queens Gloria Groove and Alexia Twister give six aspiring performers makeovers in order to boost their confidence and help them own the stage in this Queer Eye-influenced reality series. (Trailer / Wednesday, Nov. 11)

What We Wanted
If you’re in the mood for a heavy, depressing German indie drama about a marriage that’s falling apart due to fertility issues this week, Netflix has you covered. (Trailer / Wednesday, Nov. 11)