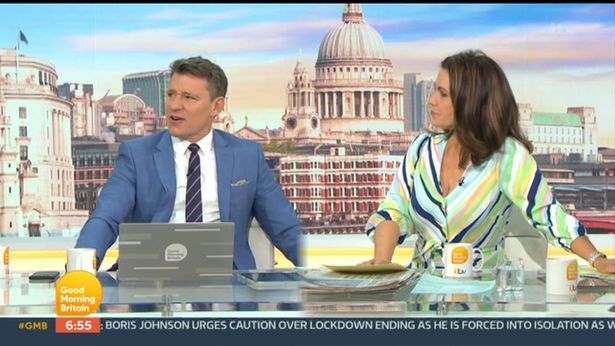 Ben Shephard was given a bit of a ticking off by his co-host Susanna Reid after he asked their colleague Charlotte Hawkins to make him a cup of tea.

The 46-year-old returned to Good Morning Britain today following having surgery on his leg two weeks ago after he had ruptured his ACL, torn his meniscus and fractured his leg during a football match.

Speaking about his recovery, he admitted he didn’t want it to go “too quickly” as he joked: “I’m quite enjoying this attention.”

“Getting lots of sympathy,” Charlotte quipped.

“People helping you with things, bringing you cups of tea and things,” Charlotte remarked.

Earlier, Susanna excitedly announced that Ben was back on the show, saying: “Hello stranger! Welcome back!”

“Thank you very much,” Ben replied.

Susanna pointed out: “You look slightly uncomfortable – I’m just going to get the mini cam.”

She then zoomed in on Ben’s leg, which was propped up by a chair.

“I just thought, I’ve been off for a few weeks, I’m going to start bringing in the changes! I feel like I should be able to do the show with my feet up!”