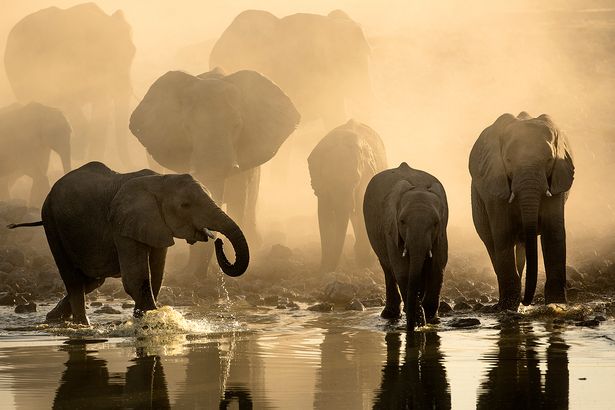 A family of elephants arriving at a waterhole for an evening drink is a common sight in the African bush.

But these elephants are drinking at the world’s first manmade waterhole – rigged with cameras to give an unrivalled view into animal behaviour.

And in a new documentary, conservationist Chris Packham and biologist Ella Al-Shamahi reveal the complex world of the waterhole for the first time.

Ella says was watching the elephant family lark around was a first for her.

“They are incredibly intelligent animals, watching them interact and communicate was quite exceptional,” she says.

Waterholes are vital to the African ecosystem, oases where elephants, lions, leopards, giraffes and hundreds of other species meet and compete for water.

Chris says: “It’s a formidable concrete structure that’s refilled from a natural underground water source, so it won’t be disappearing any time soon.

“If I lived on Mwiba, I’d be in that hide as we speak, it was fantastic.”