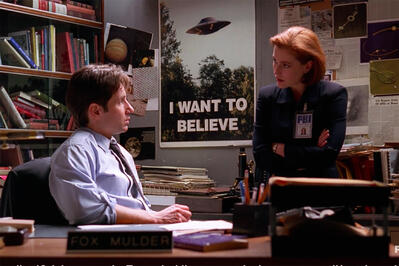 Many of us have spent more time with The X-Files’ Mulder (David Duchovny) and Scully (Gillian Anderson) this year than we have with our flesh-and-blood friends. This is fine. Times are hard! Rewatch those comfort TV shows! But maybe your family, loved ones, roommates, or neighbors with thin walls are getting tired of hearing the X-Files theme. If you’re looking to branch out and add some new shows to your watchlist — while still sticking to the spirit of the sci-fi classic — we’re here to help.

Whether you watch The X-Files for the horror, the romance, the government conspiracies, or the reminder that the world is fundamentally chaotic and unknowable, this list has something for every kind of fan. Here are nine shows you should check out next.

David Lynch and Mark Frost’s surreal masterpiece has its fingerprints all over The X-Files, from its cinematic visuals to its Pacific Northwestern eeriness. (A number of cast members also overlap, including David Duchovny.) Twin Peaks, which premiered on ABC in 1990 just three years before The X-Files and returned for a third season on Showtime in 2017, centers on the investigation into the death of small-town homecoming queen Laura Palmer (Sheryl Lee), whose murder exposes a powerful darkness in the community. The show’s blend of supernatural horror, melodrama, and absurdity changed television, pushing the bounds of what a mystery show — or any show — could do. Twin Peaks often feels like a nightmare and a dream at once. It’s stranger than The X-Files. But the shows share an understanding that sinister forces hide under the surface of any town, and that true evil doesn’t make sense.

There aren’t a lot of answers on The X-Files. Even the cases that get solved can rarely be explained. The Leftovers elevates not getting any answers to an even higher art form. The exquisite HBO drama, co-created by Lost‘s Damon Lindelof and author Tom Perrotta, is set in the dazed aftermath of the sudden vanishing of 2% of the world’s population, a global unexplained phenomenon so incomprehensible it upends normal life. Some viewers have been turned off by the unrelentingly bleak first season, but The Leftovers starts from a place of raw anger and evolves into an expansive, surreal, quietly magical drama that extends grace to the messy ways people try to heal. Like The X-Files, it’s a show about how to come to terms with an unknowable world, and both shows reach the same conclusion: The only answer is to find someone else who understands. Thematically, The Leftovers is like The X-Files; it’s just that it also has a lion sex cult.

Where to watch: Netflix, Amazon

If you enjoy watching Dana Scully blow up her professional reputation for the sake of one man and his cause, meet Kim Wexler (Rhea Seehorn). The best character on the best show on TV right now, Kim is Scully’s most worthy successor — which makes sense given that Better Call Saul was co-created by beloved X-Files alum Vince Gilligan. Kim’s relationship with corner-cutting lawyer Jimmy McGill (Bob Odenkirk) often feels like a more mutually destructive version of Scully’s partnership with Mulder: An intelligent, driven woman in a male-dominated field puts her career and life on the line out of loyalty to a rogue outsider who gives her an outlet for her own rebellious side. But while The X-Files finds romance in that idea, on Better Call Saul it’s as devastating as it is thrilling. The Breaking Bad prequel (which is packed with foreshadowing for fans of the original series but still makes sense on its own) has plenty more to offer than that dynamic, including Jimmy’s gutting quest for the approval of his older brother (Michael McKean) and his slow spiral into the local cartel’s orbit. But X-Files fans who like that little kernel of madness at the heart of its love story should be especially entertained by the darkness the AMC series has brought out in Kim. If you’ve ever wondered what The X-Files could have done with Scully in a different time, on a different type of show, Better Call Saul is doing it now.

No series on network TV is having more fun than Evil, which on its surface is basically The X-Files But With Exorcism. The CBS procedural starts with a comfortingly familiar skeptic-and-believer setup: Psychologist Kristen Bouchard (Katja Herbers) teams up with priest-in-training David Acosta (Mike Colter) and tech expert Ben Shakir (Aasif Mandvi) to investigate claims of demonic possession on behalf of the Catholic Church. But because it comes from the network’s favorite boundary pushers, Robert and Michelle King, it’s also fantastically dark and full of surprises. Vox’s Emily VanDerWerff has described the series as “an attempt to make a new version of The X-Files that’s all Darin Morgan episodes.” Like the work of the Emmy-winning writer whose comedic scripts changed the course of The X-Files, Evil strikes a tone that shouldn’t even be possible: It’s philosophical and playfully self-aware, loaded with absurdist touches but grounded in earnest fears. Plus, Kristen’s four daughters are the best kids on TV.

Where to watch: IMDb TV (free with ads), Amazon (for rental or purchase)

A friend and I once spent a summer alternating marathons of Fringe and The X-Files. They go well together. Fringe, which noted X-Files fan J.J. Abrams created with Alex Kurtzman and Roberto Orci, is obviously Abrams’ take on The X-Files (though it’s influenced by plenty of other pop culture touchstones), and the first season has been dinged for being too much of an imitator. But once the show moves beyond its early case-of-the-week format and embraces its destiny as a twisty serialized drama about parallel universes, Fringe sets itself apart. Anna Torv stars as Olivia Dunham, an agent with the FBI’s Fringe Division, who enlists Peter Bishop (Joshua Jackson) and his scientist father, Walter Bishop (John Noble), to consult on strange cases. The sci-fi drama is heavier on science than The X-Files ever was, making some episodes feel dated a decade later. But its scientific spin also gives it a greater capacity for horror — Fringe makes you believe its monsters really could come to life. Like any good drama inspired by The X-Files, the series also features a compelling romance between Olivia and Peter, but they have healthier communication skills. That’s the real X-File.

Where to watch: Hulu, Amazon

Buffy the Vampire Slayer is the ideal watch if you’re chasing the reassuring vibe of a ’90s supernatural show where the fashion is better than the creature makeup. Buffy and The X-Files share the cozy horror aesthetic of their era, and both balance monster-of-the-week episodes with a larger mythology, although Buffy‘s Big Bads rarely stick around long enough to outstay their welcome (or stop making sense). The cult classic WB-turned-UPN series is a smart teen drama that speaks its own language, centered on a female action hero whose femininity and toughness complement each other. Buffy Summers (Sarah Michelle Gellar) fights the vamps and demons in her town — which happens to be situated over a Hellmouth — as part of her calling as the Slayer, and then she goes home and does her homework. Growing up sucks.

It’s best known for its ’80s movie nostalgia, but Stranger Things shares a lot of DNA with a certain ’90s TV show. The smash-hit Netflix series debuted with a plot straight out of an episode of The X-Files (and Fringe, while we’re at it): In small-town Indiana, 12-year-old Will Byers (Noah Schnapp) disappears just as a telekinetic girl named Eleven (Millie Bobby Brown) escapes from a mysterious local lab that hides a gate to another dimension. Like The X-Files, there are monsters; also like The X-Files, the real monster is the government. Stranger Things is wildly entertaining, with a throwback vibe and a killer cast, including Winona Ryder as Will’s frantic mother. It’s as popular as it is for a reason. You think you’re too cool for Stranger Things? You’re an X-Files fan and you don’t want to watch a drama about the human cost of the government’s secret experiments? Get out of here.

Where to watch: NBC.com

X-Files creator Chris Carter has said that his goal was to make The X-Files as scary as Kolchak: The Night Stalker, an ABC series that only aired one season, from 1974-1975, but became a cult favorite. Darren McGavin stars as Carl Kolchak, a reporter who investigates strange and often supernatural crimes. The list of monsters he hunts — including shapeshifters, aliens, vampires, and a giant lizard — would be as familiar to Mulder as Kolchak’s struggle to make his coworkers believe him. The show is entertaining on its own, but it’s especially fun as a history lesson for fans of The X-Files, which paid homage to Kolchak by casting McGavin as Arthur Dales, the agent who essentially founded the X-Files unit. And there’s more: In 2005, X-Files producer Frank Spotnitz rebooted Kolchak as NBC’s Night Stalker. Though it was canceled after a handful of episodes, the short-lived reboot influenced The X-Files‘ own revival. Darin Morgan turned an unused script he wrote for Night Stalker into the very funny X-Files revival episode “Mulder and Scully Meet the Were-Monster,” which guest stars Rhys Darby in full Kolchak cosplay. The snake really ate its own tail with that one.

Where to watch: Netflix, Hulu, Amazon

If you’re looking to take in more of Gillian Anderson’s work, you’ve got a lot of good options. She’s been in a lot of good TV shows! But let’s single out Hannibal, which she recurred in over the first two seasons before joining as a series regular in the third and final season. (Though fans have been clamoring for more since its cancellation, the Season 3 finale is, in my book, the perfect ending.) Bryan Fuller’s lavish NBC drama, where the dead bodies are as elegantly composed as the food, focuses on the complicated love between Hannibal Lecter (Mads Mikkelsen) and the FBI profiler unknowingly hunting him, Will Graham (Hugh Dancy). Anderson plays Hannibal’s icy-cool psychiatrist, Bedelia du Maurier. Her performance and her wardrobe are decadent. As a bonus, as the show goes on she dresses increasingly like Carmen Sandiego.