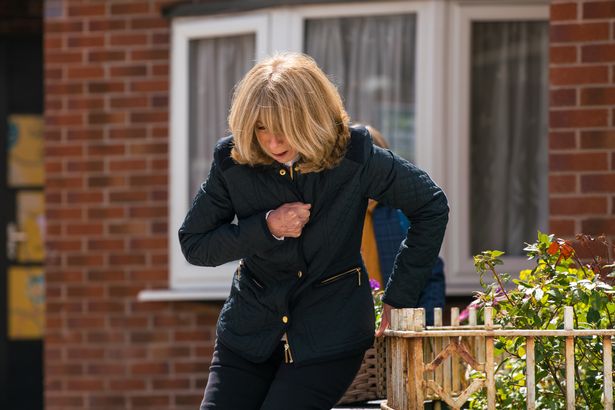 A number of Coronation Street residents are at breaking point – and one legend of the Cobbles is about to have some serious health concerns.

Tension ramps up another gear next week and for the first time the soap has filmed a kiss between two co-stars in more than a year.

It’s not just any kiss either, as we’re about to see.

Footballer James Bailey is grilled about his sexuality by reporters – so decides there’s only way to to solve the issues.

It’s a big moment for the young star, but it’s not such a good time for Gail Platt or Tyrone Dobbs.

Will this be the week the Double Glammy empire finally crumbles?

A blistering newspaper story could be about to undo all Daisy Evans’ hard work – and she is not at all happy about it.

But what does her lack of funds now mean for the future of the Rovers Return?

Here’s what’s coming up on Corrie next week.

Daisy is not best pleased that her business empire is about to crumble in front of her.

She is furious Sean has had an awakening and is trying to destroy the good name of Double Glammy.

Without the cash, the chances of her keeping hold of the Rovers are next to none.

Jenny is horrified to read the article in the Gazette slamming the shady business.

When she discovers that Daisy’s stripped Sean of his shifts at the pub and Emma has staged a walk-out, she’s furious and reinstates Sean.

Daisy’s humiliated, especially when Jenny reveals she’s looked at her finances and is going to buy the pub herself outright.

Coronation Street airs Mondays, Wednesdays and Fridays at 7.30pm and 8.30pm on ITV