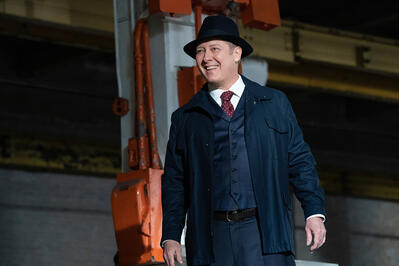 The Blacklist, NBC’s endlessly twisty procedural about criminal mastermind Raymond “Red” Reddington (James Spader) and his elaborate plot to help the FBI catch most-wanted criminals in service of his own mysterious personal agenda, is one of the most consistently entertaining dramas left on broadcast TV. And now that Season 8 is nearly here (Friday, Nov. 13), it’s time to get back into the world of Red and his merry band of fellow Blacklisters. But what do you do ’til then? Watching something like The Blacklist!

The shows below include action shows with a combination of serialized and purely episodic storytelling, a dynamic like the one between Red and his not-daughter, FBI agent Liz Keen (Megan Boone), a task force with funny sidekicks, and The Blacklist‘s most important ingredient, James Spader himself. This list reminds us of the time we were eating breakfast octopus on the Adriatic coast with the most beautiful Romanian textile heiress…

Everything to Know About The Blacklist Season 8

If you like The Blacklist, chances are you watched Blindspot, too, but if you didn’t, it’s definitely worth checking out. It’s one of the shows most like The Blacklist on this list, in terms of overall vibe (and title). It was even paired with The Blacklist on NBC’s schedule on several occasions throughout both shows’ runs (Blindspot ended this summer after 100 episodes). Like The Blacklist, it’s a show about an improbable ally helping the FBI solve crimes, in this case a tattooed amnesiac ass-kicker known only as Jane Doe (Jaimie Alexander), who was found in a duffel bag in Times Square. Like The Blacklist and the “Who is Red Reddington?” question, the show gets a lot of mileage out of untangling Jane’s mysterious identity. It’s a twisty and action-packed conspiracy thriller with a quirky sense of humor.

Watch it on: Amazon (purchase)

The Blacklist‘s core idea of a new bad guy each episode is shared by CBS’ very underrated Person of Interest, in which an advanced artificial intelligence spits out the social security number of a person predicted to commit or be involved in a crime to a pair of dudes who investigate the situation and then act accordingly. Those two dudes are the Odd Couple pairing of computer nerd Harold Finch (Michael Emerson) and former secret op John Reese (Jim Caviezel), who forge one of TV’s best bromances as the seasons go on. But beyond the basic procedural format, Person of Interest, from Westworld creator Jonathan Nolan, explores artificial intelligence and government corruption better than just about anything else. It’s also disarmingly funny, features a great LGBTQ storyline, and features an adorable dog named Bear who will rip your throat out.

Watch it on: IMDb TV, Hulu

Like The Blacklist, this is a “crook helps law enforcement” show. FBI Special Agent Peter Burke (Tim DeKay) makes a deal with con man Neal Caffrey (Matt Bomer), a brilliant con artist the agent put behind bars, to do a sort of work-release program to help Burke and his team catch other white collar criminals. The six-season USA series has a similarly fun tone, a mix of standalone case-of-the-week episodes and season-long arcs, great guest stars, and a great team helping the two main guys (shout-out to Mozzie [Willie Garson], Neal’s partner in crime and law enforcement).

If you love watching a quirky guy be one step ahead of everybody all over New York (The Blacklist barely pretends that it’s in D.C. and not NYC, where it films), tuning in to this show should be Elementary. Jonny Lee Miller stars as a modern version of Sherlock Holmes, a brilliant but addiction-plagued English police consultant who helps the NYPD alongside Dr. Joan Watson (Lucy Liu), who’s originally hired as his sober companion but eventually becomes his apprentice as it becomes clear her medical knowledge is useful and she has a talent for investigation. Their mentor-mentee relationship is sort of like Red and Liz’s, without all the father/daughter complications. It ran for seven seasons on CBS and wrapped up last year.

USA’s breezy seven-season action drama has a lot in common with The Blacklist. It has an episodic case-of-the-week format and a quippy sense of humor, as well as broader season-long arcs about conspiracies that will be easily digestible for any Blacklist fan. The charming Jeffrey Donovan stars as Michael Westen, a CIA operative who is suddenly and without explanation blacklisted from the agency and sent home to Miami, where he has to work as an unlicensed private investigator to make ends meet while trying to figure out who burned him and why. It boasts arguably the most entertaining supporting character of any show on this list, Bruce Campbell’s well-connected, wisecracking intelligence operative Sam Axe.

Watch it on: Hulu, IMDb TV

The best part of The Blacklist is James Spader’s performance as Raymond Reddington. He has a magnetic energy that’s completely unique to himself, and it’s impossible to imagine the show without him. Boston Legal, the legal dramedy he led before The Blacklist, is very different than our beloved Blacklist, but no less Spaderific. He plays Alan Shore, a brilliant lawyer working for Denny Crane (William Shatner), the firm’s founder and his best friend. Spader won three Emmys for playing Alan Shore — once for The Practice, from which Boston Legal spun off, and twice for Boston Legal, which ultimately ran for five seasons on ABC.

Watch it on: Showtime

Billions, Showtime’s drama series about the ongoing personal and professional conflicts of attorney Chuck Rhoades (Paul Giamatti) and hedge fund titan Bobby Axelrod (Damian Lewis) is the show least like The Blacklist on this list, and it’s hard to compare them on a plot level, but there’s definitely a certain feeling both shows have. There are a few things contributing to it, like the New York filming locations, the color palettes, the use of a lot of the same character actors (at least seven people have appeared on both shows, including Amir Arison and Harry Lennix), and the double-crossy sense of fun the shows share. Red Reddington just kinda feels like he could be a character on Billions. He’s basically a charismatic white collar criminal like Bobby who also happens to do violent crimes as well.