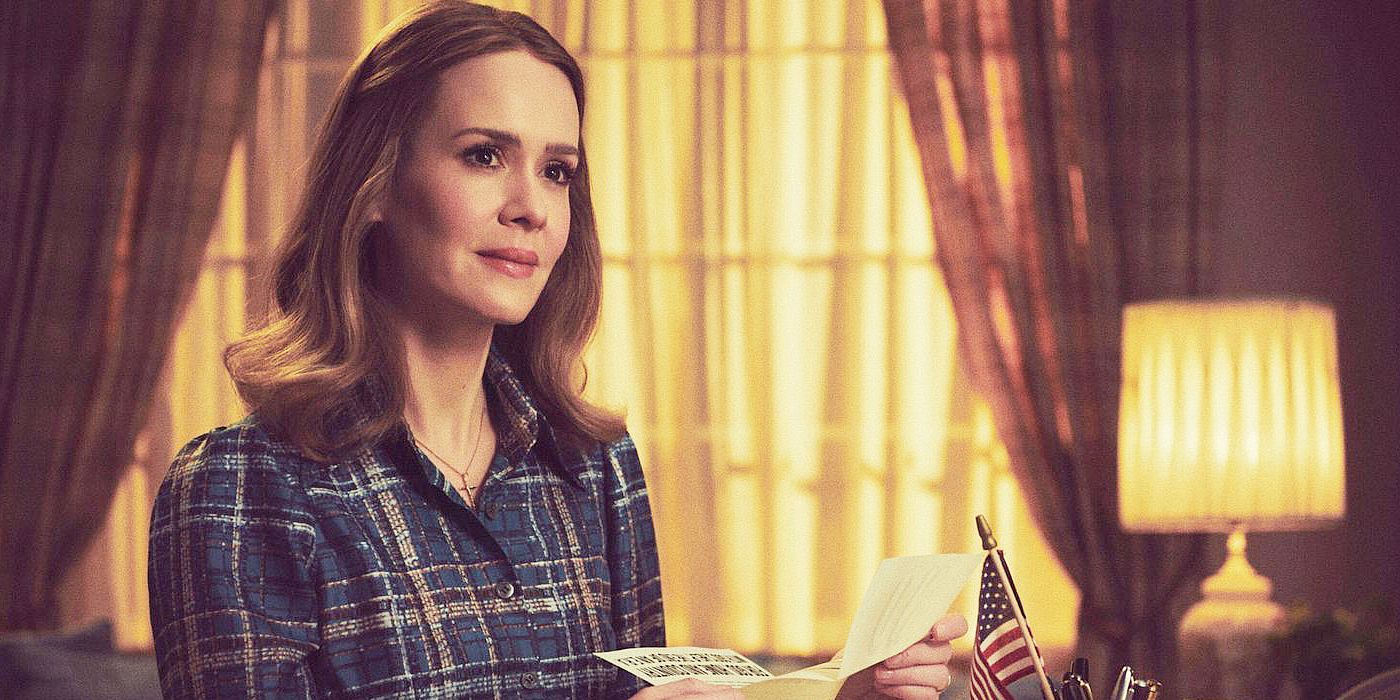 American Crime Story: Impeachment gives a first look at Sarah Paulson as Linda Tripp. Executive produced by Ryan Murphy, the anthology crime series is one of the latest collaborations between Murphy and Paulson, following the success of Ratched and American Horror Story. Originally, the third season of American Crime Story was set to premiere September 27 on FX but was delayed due to the coronavirus pandemic.

Premiering in 2016, the first season of American Crime Story, which tackled the events surrounding the O.J. Simpson murder trial, was a critical success and garnered a Golden Globe win for Paulson for her portrayal of prosecutor Marcia Clark. Continuing to highlight famous crimes from the ‘90s, season 2 focused on the assassination of fashion designer Gianni Versace. Earlier this year, it was announced that the third installment of American Crime Story would zero in on the Clinton-Lewinsky scandal, as told from Lewinsky’s point of view, with Paulson tapped to portray Linda Tripp. Tripp worked with Lewinsky in the Pentagon’s public affairs department and was a close confidante to Lewinsky. Now the upcoming series offers a look at Paulson completely transformed.

Revealing the series has begun principal photography, Paulson took to Twitter to share the first look at herself as Tripp in American Crime Story. Notorious for recording her private conversations with Lewinsky, Tripp was considered a key figure in the scandal, along with Paula Jones, who will be played by Annaleigh Ashford (Masters of Sex). Take a look at Paulson’s astounding physical transformation below:

Of course, following the preview of Paulson as Tripp, Impeachment has garnered further anticipation to see how the rest of the cast will look like the iconic political figures. American Crime Story: Impeachment also stars Clive Owen as Bill Clinton, Beanie Feldstein (Booksmart) as Lewinsky, Betty Gilpin (GLOW) as Ann Coulter, and Billy Eichner as journalist Matt Drudge. At the time of this writing, it has yet to be revealed who will play Hillary Clinton. However, it has been emphasized that the former first lady will not be a significant character in the series.

Based on Jeffrey Toobin’s book A Vast Conspiracy: The Real Story of the Sex Scandal That Nearly Brought Down a President, Impeachment will be a great platform to showcase the talents of the attached cast. Paulson as Linda Tripp has been one of the most anticipated works of her career. Given Paulson’s ability to inhabit her roles and the surrounding of her character, she was the ideal choice to tackle the prominent figure in the scandal that will be covered in American Crime Story: Impeachment.