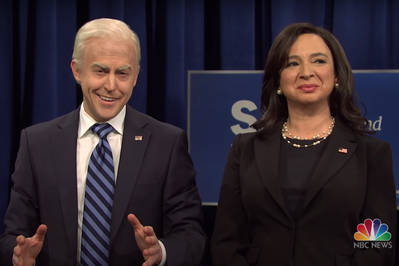 Over the past handful of years, Saturday Night Live has had a revolving door of Joe Bidens — from Jason Sudeikis to Woody Harrelson to Jim Carrey — and the show has officially introduced the latest actor to don the white wig. Carrey, who played Biden for the first handful of episodes of Season 46, announced via Twitter that he would be stepping away from the role, writing that he was “just one in a long line of proud, fighting SNL Bidens.” On Saturday’s episode, Alex Moffat was officially inducted into the hall of Bidens, assuming the role in light of Carrey’s departure. He dropped in to unveil the new him during the cold open, which saw Beck Bennett’s Mike Pence getting the COVID-19 vaccine.

“Joe, you look different somehow,” said Bennett’s Pence. “I’m like Colonel Sanders — every time you see me, I’m a different guy,” Moffat’s Biden replied. “There’s a good chance that this time next year, I’m gonna be Mario Lopez.” The men were joined by Maya Rudolph’s Kamala Harris, who was (thankfully) there to drag Moffat’s Biden off before he could start talking about Kwanzaa.