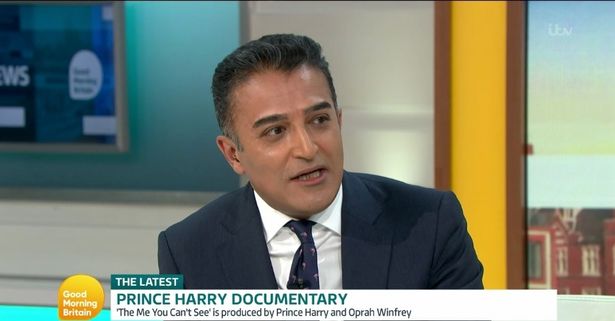 Good Morning Britain host Adil Ray has defended Prince Harry after he was criticised for talking about his mental health – with Susanna Reid accusing him of oversharing.

Adil pointed out Prince William, Harry’s brother, has also talked about his mental health before in the past, and did not receive such a backlash.

With regards to the criticism that Harry and wife Meghan Markle are “cashing in” on their Royal status, Adil pointed out other members of the monarchy have flogged products, and also have opened up about their mental health.

Amber Athey, Washington Editor of Spectator US, said: “I think Harry is putting fame before family.”

“Why is it one rule for Harry and another for William or Diana? And when Charles was honest about his experiences at school in the past as well?” asked Adil.

Journalist and author Afua Adom said: “Prince Harry could walk into a room and say hello, 50% of that room would find a problem with it.

“It’s because he chose to do his own thing and go his own way, and people just cannot stand it.

“At this time, where Prince Harry is trying to do some good, talk about mental health issues and raise awareness in this documentary with lots of other stories in it, of course people are going to find something wrong with it, just because they can.”