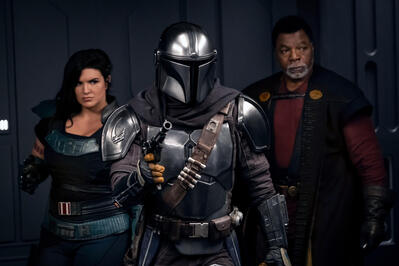 Our long intergalactic nightmare is finally over: The Mandalorian Season 2 has landed, continuing the adventures of Mando (Pedro Pascal) as he protects everyone’s favorite Christmas toy, Baby Yoda, from the bad guys who want him. But after watching the latest episode there’s MORE waiting? The weekly rollout of the Disney+ sci-fi series means we’re all going to need to find something to pass the time between new installments.

But aside from a rewatch of The Mandalorian Season 1, what will we watch while we wait for the next episode of Season 2? We’ve scoured the universe (well, our cable guides) to find more shows like The Mandalorian to tide you over. From sci-fi epics to space westerns to just plain westerns, these shows will keep you busy until The Mandalorian returns.

Mando, the mysterious masked main character of The Mandalorian, is, for lack of a better term, a space cowboy. Riding on untamed beasts across space deserts, sauntering into space saloons, drawing weapons in space duels… all he really needs is a space spittoon to be a full-on galactic gaucho. But to learn more about this unique lifestyle, you have to turn to the original TV space cowboys, the crew of The Serenity. Joss Whedon’s science-fiction series about a band of rebels engaged in smuggling and running cargo is a cult favorite for its characters and dialogue, but it’s the setting and tone that make it similar to The Mandalorian. And while there is no Baby Yoda, there is someone that the oppressive space government is after: the superpowered psychic River Tam (Summer Glau). The score even has that familiar cowboy twang.

Though they’re different in striking ways, no list of shows like The Mandalorian would be complete without including The Expanse. The Syfy show has been the best, uhh, sci-fi show on the air since it debuted in 2015, and now that it’s been scooped up by Amazon (thanks to superfan Jeff Bezos), it’s got a budget to back up its lofty storytelling. Based on a series of popular books, The Expanse follows a war between the Earth and Mars, which has been colonized in the far future. There’s also the working class members of The Belt, who mine asteroids for precious resources and get caught up in the war, and a strange alien material that’s been recently found aboard an abandoned ship that killed its whole crew. Complex and engrossing, The Expanse is the definition of a space epic.

Where to watch: Syfy.com

If it’s bounty hunters in spaaaaace that you’re looking for, this well-reviewed Canadian sci-fi series that aired in the U.S. on Syfy should be your next target. It follows a trio of bounty hunters working a small system of planets and moons for an independent faction that refuses to take sides in any conflicts. And like The Mandalorian, it finds time to make things funny, with plenty of humor thanks to a swashbuckling tone and former Lost Girl showrunner Michelle Lovretta taking the reins here.

The Mandalorian doesn’t talk much, but when he does, he makes his words count, and the only thing scarier than a sharp-shooting badass is a sharp-shooting badass who can fire off a good zinger before cuffing a bad guy. As a U.S. marshal from Kentucky, the head honcho from Justified, Raylan Givens (Timothy Olyphant, who is in The Mandalorian Season 2), never misses a chance to fire verbal bullets before capturing a despicable lowlife, and Justified is acclaimed for having some of the best dialogue ever on TV. It’s clear that Mando, with this enviable swagger, was modeled at least partially on Givens, even though they’re technically on the opposites of the law, but morally they occupy the same grey area. If you want a real antihero traveling to weird places and taking out tough guys, Justified should be your next binge.

The inferior but more canonically connected Star Wars: The Clone Wars animated series from 2008 might be more related to The Mandalorian and more readily available on Disney+, but the 2003 Clone Wars that aired on Cartoon Network is so much better. Created by animation living legend Genndy Tartakovsky (Samurai Jack, Primal), this series of animated shorts (Seasons 1 and 2 featured 10 three-minute episodes each, the third and final season featured five 12-minute episodes) is set between Attack of the Clones and Revenge of the Sith and is not technically considered official Star Wars canon, which may be why it’s not on Disney+. But it features Tartakovsky’s signature animation style and mostly dialogue-free storytelling, making it a dazzling watch. Thankfully, the entire collection, running just over two hours long, has been uploaded to YouTube.

With its simple storylines, gorgeous details, and marketable cute co-star, The Mandalorian is a crossover hit that has found fans not just of hardcore science fiction, but casual fans of all things outer space. Raised by Wolves is not for those people. The intense HBO Max original is executive produced by Ridley Scott, who brings his experience with lifelike robots to the story of a pair of androids tasked with raising human children on a deserted planet, not unlike one that Mando might find himself on. It’s an odd duck, but one that seriously takes on themes of parenting and religion in fantastic — and sometimes inexplicable — ways. It’s also one of the most original sci-fi series to hit TV in a long time.

The Mandalorian separates itself from other science-fiction shows because it’s equally a western, blending the genres to create a unique-feeling subgenre. Netflix’s sci-fi epic Altered Carbon takes a similar approach in a different direction: a sci-fi noir. The series is set in the far future when expensive technology allows the incredibly loaded to upload their consciousness to discs called stacks, which are then implanted into hunky bodies, effectively creating a way for people to live forever and in the body they choose. The star of the show is Takeshi Kovacs, a former member of the military who became a mercenary before being put on ice for years, only to be brought back in a new body and become a detective. Like Mando, he’s mostly a loner who runs jobs for other people on a variety of planets in hostile territory.

This late-’90s Japanese anime got a raw deal when it was canceled due to some of its adult-oriented content, but it became a hit when it was rediscovered shortly after its original run ended. In addition to being hailed as one of the best animes of all time, it’s one of the definitive space westerns out there, following a group of bounty hunters hunting down criminals around the solar system. But beyond the obvious premise, Cowboy Bebop explores morality, violence, and romance with style better than most live-action shows.

The Mandalorian Season 2 airs new episodes on Fridays on Disney+.