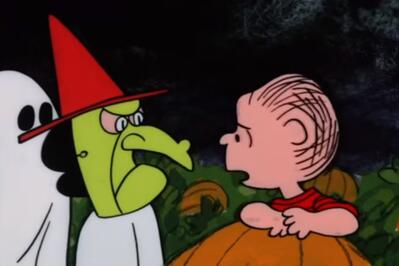 It’s been more than 50 years since It’s the Great Pumpkin, Charlie Brown first debuted on CBS, but the cute cartoon is still a Halloween staple. The 1966 animated film follows the titular Charles Schulz character as he finally gets invited to a Halloween party, while his pal Linus decides to wait out in the pumpkin patch in hopes of seeing the Great Pumpkin, the Santa Claus-like figure only Linus believes in.

After airing on broadcast TV for decades, It’s the Great Pumpkin, Charlie Brown has moved to streaming platform Apple TV+ this holiday season, along with other Peanuts specials. The news dealt a major blow to fans who are used to watching the special on TV every year as the leaves turn. But Apple is giving trick-or-treaters a treat to soften the blow: if you’re not a subscriber, you can still watch the special for free for a limited amount of time.

From Oct. 30 to Nov. 1, It’s the Great Pumpkin, Charlie Brown is streaming for free on Apple TV+, Apple has announced. No subscription or Apple equipment is required. Viewers can go to tv.apple.com or the Apple TV app to watch.

Apple will also make A Charlie Brown Thanksgiving, which hits the platform on Nov. 18, free from Nov. 25 to Nov. 27. A Charlie Brown Christmas begins streaming exclusively on Apple TV+ on Dec. 4 and will be available to stream for free from Dec. 11 to Dec. 13.

“Tricks or treats,” everyone!