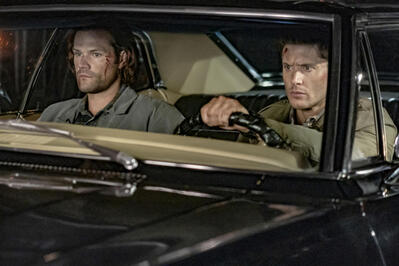 The road so far… has been awesome. Supernatural said goodbye after 15 seasons featuring our favorite brothers Sam (Jared Padalecki) and Dean (Jensen Ackles) Winchester slaying demons to classic rock tunes. The finale was bittersweet, but even more difficult at this time is figuring out what to watch next.

Yes, a Supernatural rewatch is definitely in order for everyone, but what else can you watch now that Baby is parked in the garage for good? We’ve come up with a list of shows that all Supernatural fans should watch next. Most deal with the supernatural, some feature sibling bonds, and others feature investigators trying to explain what nothing else can.

The NBC cult hit Grimm, about a Portland cop (David Giuntoli) who discovered he was from a long line of guardians sworn to protect the world from mythological creatures, had all the components to become the next Supernatural. It was a crime procedural loaded with fantasy elements. It had strong characters that could carry arcs across multiple seasons. It was dark, but never shy about being a little goofy. And most importantly, it was a whole lot of fun. While other more-marketed shows flopped, Grimm, which ran for six seasons and 123 episodes, staved off cancellation with consistent ratings for many years because of its rabid fans, much like how Supernatural did on The CW.

One type of show we don’t really talk about Supernatural being is a detective show, but more often than not in the most intriguing episodes of the series, Sam and Dean spend most of their time sleuthing claims of ghosts or other paranormal phenomena than actually hunting them. There’s no doubt that Jim Butcher’s supernatural detective book series The Dresden Files influenced Eric Kripke’s vision of Supernatural, so if you want that Supernatural vibe after the series finale, your next watch should be the 2007 Dresden Files adaptation that aired on Syfy (then Sci Fi Channel). It follows Harry Dresden (Paul Blackthorne), a private investigator and wizard, as he helps cops with supernatural cases in Chicago. Harry has a little bit of a Dean thing going on, as he’s a cool cat who loves his late father but is also a little rough around the edges, and the 2007-ness of the show will remind you of Supernatural‘s early seasons, right down to the funky jazz-rock TV score. Of all the shows on this list, this is easily the most like Supernatural, and real fans have been clamoring for a Dresden Files-Supernatural crossover that never happened except in fanfic.

I mean, obvious, but this list wouldn’t be complete without it, and Supernatural wouldn’t exist without The X-Files. The Fox drama not only saved Fox from an early grave, but it brought sci-fi television to the mainstream and opened up the possibilities of what a procedural could be. Plus, for those of you Supernatural fans who couldn’t stop shipping the main characters, there’s real shippin’ fuel between Agent Scully (Gillian Anderson) and Agent Mulder (David Duchovny). And even though it’s not quite at Supernatural‘s 15 seasons and 327 episodes, it still clocks in at an impressive 11 seasons and 218 episodes.

If you like Supernatural for the combination of standalone episodes and serialized genre storytelling, then cancel all your plans and get started on Fringe. Just as Supernatural was in the middle of its epic three-season arc that concluded with Season 3, Fringe was perfecting the “mythalone” episode: a perfect blend of procedural-style episodes and large-scale arcs loaded with mysteries and twists. The Fox show was produced by J.J. Abrams and his fingerprints are all over it, telling the story of a small FBI team that investigated unexplained phenomena and throwing in massive reveals that all pushed the show to a final conclusion. But like Supernatural, the character relationships were key. Josh Jackson and John Noble played a son-father duo whose rocky relationship was the emotional core, and Jackson’s romance with Anna Torv’s character is an epic love story that spanned multiple dimensions and multiple versions of themselves.

Where to watch: Amazon (for purchase)

No, they weren’t brothers like Sam and Dean, but Person of Interest‘s Harold Finch (Michael Emerson) and John Reese (Jim Caviezel) shared a fraternal love for each other that developed over five season into one of TV’s best bromances. The CBS show was sold like another of the network’s procedurals, but its take on the dangers of artificial intelligence and government corruption — courtesy of creator Jonathan Nolan (Westworld) — were much more cerebral than the acronyms that came before it. Finch, a nerdy computer whiz, and Reese, a former special forces stud, teamed up to stop crime before it happened with the help of a machine that predicted perpetrators before they committed the act. Like Supernatural, episodes were self-contained, bled together for a bigger story, were surprisingly funny, and would sometimes break format for a little bit of fun. As a Warner Bros. show, there’s hope it will head to HBO Max at some point.

The brothers Winchester did remarkable things for sibling storytelling on television, but can we get something for the sisters? The cult favorite Wynonna Earp, another Syfy series, went deep into the bond of sisterhood with its story of Wynonna Earp (Melanie Scrofano), the great-great-granddaughter of Wyatt Earp who is tasked with banishing demons from this earthly plane, and her younger half-sister Waverly Earp (Dominique Provost-Chalkley). Like Sam and Dean, these two are willing to do anything for each other, AND they send demons back to Hell. It’s a really strong supernatural series about family bonds and kicking ass, it’s surprisingly funny, and it deals with themes of destiny, just like Supernatural.

If it’s a pair of regular folk hunting demons that you’re looking for check out the British comedy Crazyhead, a delightful and frightful horror comedy about a young bowling alley worker who thinks she’s mentally ill but learns that she’s a “seer” — someone who can see demons who are hiding among the living — from another seer who befriends her. It’s more of a serialized comedy than Supernatural is, as the two ladies also deal with the same troubles regular young women do, but isn’t afraid to get serious as you’ll see at the end of the first episode. Crazyhead‘s best for a Supernatural fan who wants a quick diversion; at just six 45-minute episodes long in its one and only season.