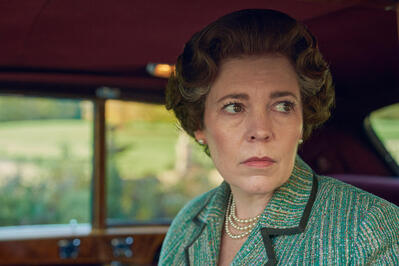 The Crown Season 4 delivered one of the series’ best seasons yet. This season covers events in Queen Elizabeth II’s (Olivia Colman) reign spanning from the year 1979 up until about 1990. If you know your history, you know that means The Crown is now tackling the Margaret Thatcher (Gillian Anderson) years at Downing Street, and exploring the long-awaited beginning and beginning-of-the-end of the Prince Charles (Josh O’Connor) and Princess Diana (Emma Corrin) relationship. That’s some juicy stuff.

But if you’re all finished with The Crown and looking for something to fill that Crown-shaped hole in your heart until whenever Season 5 arrives, here are nine shows — from more historical dramas to docuseries to yes, baking competitions — that might do the trick.

Where to watch: Amazon Prime, Peacock

You want great period piece costumes? Gorgeous production design? Wealthy English people being persnickety? Have I got a show for you. It’s called The Crown. But also, Downton Abbey. Julian Fellowes’ sprawling ensemble drama about the aristocratic Crawley family and the people who work in their estate takes place prior to the events of The Crown (the series kicks off with the sinking of the Titanic in 1912), and although Downton leans much further into its delicious soapiness than The Crown, the two shows feel very much tied together. So if you’ve finished The Crown and you miss seeing how the other half lives, or miss hearing people talk about family duty, or would like to visit with another set of sisters who sometimes make life miserable for one another but ultimately love each other, you can find all of that and more within the six seasons (and a movie!) of the upstairs/downstairs shenanigans of Downton Abbey.

Where to watch: Netflix, Showtime

If you thought the Windsors had problems, wait till you meet the Tudors. This 2007 Showtime series chronicles the reign of King Henry VIII (Jonathan Rhys Meyers) of the Tudor dynasty as he sat upon the English throne from 1509 until 1547. This sexed-up version of history gives us a monarch who runs things, um, a little bit differently than Elizabeth II does. The Tudors‘ Henry is volatile, power-hungry, and horny as hell. The series manages to get through all of Henry’s six wives in just four seasons — the Anne Boleyn (Natalie Dormer) storyline is, unsurprisingly, the most compelling — plus peep your eyes on Henry Cavill pre-Superman. That tip is just a little gift from me to you this holiday season. You deserve it!

Where to watch: Amazon Prime, PBS

In 2015, Queen Elizabeth II became the longest-reigning British monarch in history when she surpassed the record held by her great-great-grandmother Queen Victoria, who just happened to be the last queen to reign before Elizabeth. There are lots of parallels in the women’s lives. Like The Crown, PBS Masterpiece’s deep dive into a queen’s reign begins with the young, barely-prepared Princess Victoria (Jenna Coleman) stepping into power surrounded by a whole lot of people doubting she can handle the job. Victoria, which completed its third season in 2019, chronicles the life of the queen as she grows to be a formidable monarch while also dealing with her husband Prince Albert (Tom Hughes), an outsider who struggles to find his role within the monarchy, and becoming a mother. Again, parallels.

If you’re into stories about female monarchs holding it down but need a reprieve from sometimes antiquated English traditions (said with love, people!), give Hulu’s The Great a go. The series, about the rise of Catherine the Great (Elle Fanning), Empress of Russia, as she plots to overthrow her husband Peter III (Nicholas Hoult) debuted its first season earlier this year and has already been renewed for a second. Be forewarned: The tone of The Great is almost the exact opposite of The Crown. It’s weird, funny, and full of debauchery. While it’s extremely loose on the historical accuracy, it’s a clever satire and Fanning is, well, great as the series lead.

Who among us doesn’t need more Olivia Colman in their lives? As Queen Elizabeth II, she has a tough line to walk between duty and, you know, being an actual human with actual human emotions; she’s never better than when that struggle bubbles close to the surface (like say, when you visit with all four of your children and realize they are absolute train wrecks). For another Colman character with a job to do in which having emotions might get in the way, try the British crime series Broadchurch. Colman plays Ellie Miller, a detective in a small English coastal town forced to work with outsider D.I. Alec Hardy (David Tennant) on a case involving the murder of a local boy. You’ll come for the great chemistry between Colman and Tennant, but be sure to stay for Colman’s gutting performance as her world is turned upside down.

If after The Crown Season 4 you’re looking for another show set in the 1980s that has both plotlines with consequences on a global scale and intimate looks at complicated parent-child relationships and a complex marriage between an Elizabeth and Phillip, watch The Americans. FX’s Cold War-era espionage drama ran for six seasons from 2013 to 2018 and tells the story of Elizabeth (Keri Russell) and Phillip (Matthew Rhys) Jennings, Russian spies living a double life as the perfect American family outside of Washington D.C. The Americans is certainly more action-driven than The Crown, but both shows are equally as gripping and complex.

Where to watch: Hulu, OWN

Despite its title, OWN’s Queen Sugar has nothing to do with the monarchy. It does, however, have everything to do with fraught sibling relationships as one daughter takes over the family business after her father has died. Sound familiar? Created by Ava DuVernay and based on the novel by Natalie Baszile, Queen Sugar tells the story of the Bordelon family and their sugarcane farm in rural Louisiana. After the family patriarch suddenly dies, estranged middle sibling Charley (Dawn-Lyen Gardner) winds up leaving a privileged life in Los Angeles behind and moves home to try and keep the farm afloat, while also trying to heal wounds and build relationships with her half-siblings Nova (Rutina Wesley) and Ralph Angel (Kofi Siriboe). Like The Crown, family trauma both old and new sometimes makes keeping the Bordelon family intact difficult. Also like The Crown, the cinematography of Queen Sugar might be worth the watch alone.

Are you an insatiable anglophile who hasn’t yet watched The Great British Baking Show (or The Great British Bake Off, as they call it in the UK)? What are you even doing? Finish up The Crown and move directly into this long-running British baking competition series. It will soothe your weary soul. The series has home bakers square off in a tent in the middle of an English garden and has only grown in popularity thanks to its addictive politeness. All of the competitors are kind to one another and genuinely seem to want to help each other do their best, so if you’re searching for a different look at British culture, one that’s light on drama, spend some time in the Baking tent.

The Royal House of Windsor

If you’ve been watching The Crown with your computer by your side so you can look up the accuracy of the events being portrayed, you might want to check out this six-episode documentary series currently available on Netflix. The Royal House of Windsor was released in 2017 to mark 100 years since the beginning of the House of Windsor — King George V (Elizabeth II’s grandfather) changed the family dynasty’s name to Windsor from Saxe-Coburg and Gotha in 1917 due to anti-German sentiment at that time. The docuseries starts there and details the history of the Windsors, including King Edward VIII’s abdication, Elizabeth’s relationship with her father King George VI, Elizabeth and Philip’s marriage, and yes, the Diana years.

The Crown is now on Netflix.