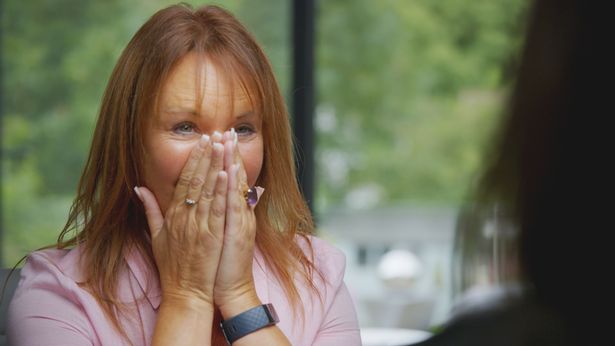 A mother who was told not to look at her baby girl when she was born because she was being adopted has been reunited with her more than 50 years later.

Amanda spoke of her struggles after learning she was adopted.

She said: “My mum said I was special because I had two mums. When I was younger I didn’t really want to know that I had another mum because I felt as if I wasn’t wanted. I didn’t want to feel sad or hurt.”

But after turning 50 she made the decision to search for her birth mum.

TV bosses tracked down her mother, who is now Sue Haslam, in Burton Latimer in the East Midlands.

Sue said over the years she had tried to find her daughter, as well as telling her two sons they had a half-sister.

Amanda travelled to the East Midlands where she met her birth mother. The meeting was extra emotional as it came during the pandemic so they were unable to hug or touch each other but tears flowed as they had their first conversation.

After asking for forgiveness, Sue said: “I’ve always loved her… it means a lot to me to give her a birthday present. It felt as though I’d known her for years. It feels like I have got her back and I am so proud of her.”

Amanda feels the same and added: “I knew I belonged to her, we’ve got the same nose and mouth, I knew instantly. There is an instant ­connection. It’s nice to feel wanted, it’s a great feeling.”

Amanda and her birth mother have since been able to give each other a proper hug – at long last.

Amanda has also been able to meet her brothers Trevor, 49, and Richard, 47.