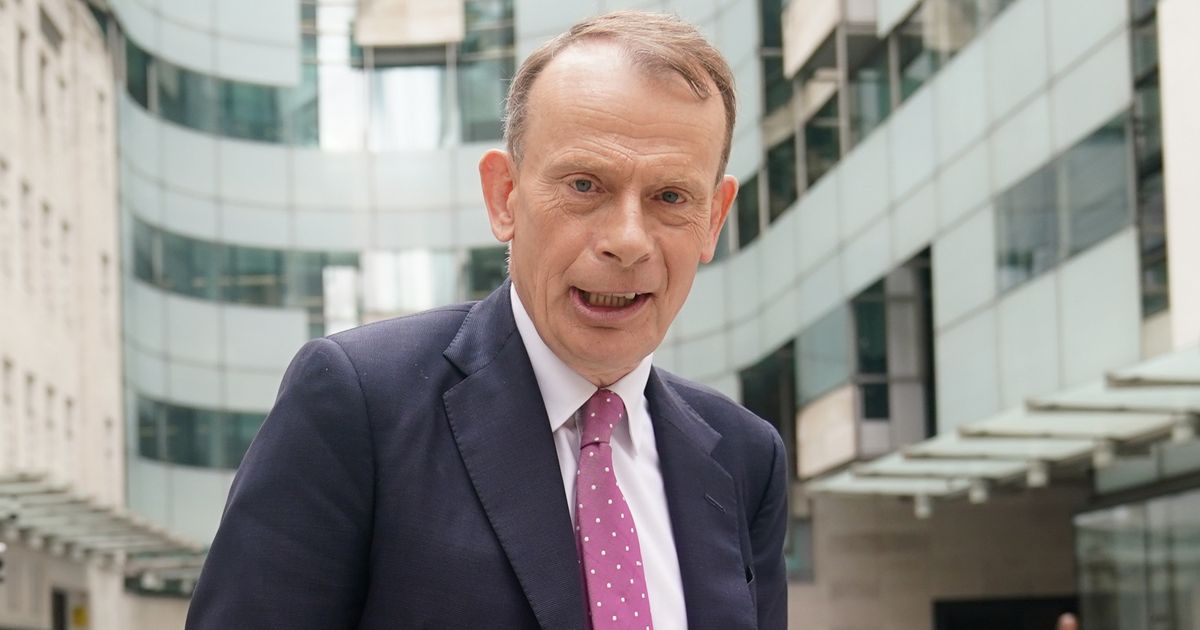 Andrew Marr will leave the BBC in the New Year after 21 years with the channel.

The broadcaster broke the news of his pending departure via his Twitter account on Friday, explaining a desire to get his “own voice back” away from the BBC.

Within minutes of the announcement, speculation began about just who will replace the veteran journalist.

Andrew, 62, told his followers how he predicts British politics is about to embark on “an even more turbulent decade” and from next year, he will be moving to Global to “write and present political and cultural shows”.

He added: “I have been doing the Andrew Marr show every Sunday morning for 16 years now and that is probably more than enough time for anybody!”

Andrew’s weekly morning show on BBC One has been one of the state broadcaster’s flagship political programmes for many years now, classed as vital viewing for those in, and interested, in the Westminster bubble.

His resignation leaves a vacancy available for another big name to nab one of the top jobs in political journalism.

Currently the BBC’s political editor, Laura Kuenssberg is one of the most popular bets to replace Andrew Marr on the Sunday morning show, currently favourite at 2/1 with Ladbrokes.

Speaking about the possible contenders for the role, Alex Apati of Ladbrokes recognised Laura, 45 as any early favourite to nab the high profile gig.

He said: “The early signs point towards Laura Kuenssberg taking over from Andrew Marr in the near future, although Piers Morgan stands out further down the betting if BBC chiefs wanted to get one over on their ITV rivals.”

Over recent months, it’s been reported that Laura is set to be replaced as the BBC’s political editor – a position she has held for the past six years – and possibly join the Today programme as part of a reshuffle at the channel.

Like Laura, Nick Robinson is also a long-standing figure within the BBC political team – having previously worked at the political editor for 10 years in the past.

Ladbrokes currently list the broadcaster just behind Laura Kuenssberg as second favourite to replace Andrew Marr, with short odds of 3/1.

Nick, 58, currently a presenter on the BBC’s Today programme and in the past, has presented programmes such as Westminster Live, Weekend Breakfast and Late Night Live on BBC Radio 5 Live, and Newsnight on BBC Two.

Zeinab Badawi is another favourite to land the top BBC job
(

Zeinab Badawi has actually hosted The Andrew Marr Show before, so should the presenter replace the departing star on a full-time basis, viewers would recognise a familiar face on Sunday mornings.

The presenter of BBC Global Questions is currently 7/2 with Ladbrokes to land the high profile gig.

Zeinab began her career with ITV Morning News before going on to co-present Channel 4 News with Jon Snow from 1989 to 1998, before leaving to join BBC News.

The broadcaster has in the past presented World News Today, broadcast on both BBC Four and BBC World News, and Reporters, a weekly showcase of reports from the BBC.

With odds of 10/1 from Ladbrokes, Piers Morgan seems an unlikely choice to join the BBC but still not completely unlikely.

Since sensationally quitting Good Morning Britain earlier this year – thanks to his on-air rant about Meghan Markle – the presenter has been without a regular TV gig.

In September, it was announced that the former Life Stories host would be working with Rupert Murdoch to launch a brand new national television station, touted as a rival to the struggling newly-launched GB News.

Piers and the BBC probably wouldn’t be a suitable long-term match, given the fact the state funded broadcaster requires their employees to remain politically neutral in public and Piers is known for expressing his unfiltered opinions on his social media channels.

Victoria Derbyshire is already a regular on BBC screens
(

After her stint on I’m a Celebrity…Get Me Out of Here! Victoria Derbyshire would be a familiar face to potential new viewers who perhaps hadn’t been interested in a political show before.

The award-winning broadcaster is a popular figure in the world of journalism and has fronted many of the BBC’s biggest programmes over the years, including Panorama and Newsnight.

Victoria, 53, also hosted her own self-titled current affairs programme on BBC Two – a show which axed by the channel in 2020.

Ladbrokes have the star at 8/1 to return with her very own show and replace Andrew Marr on Sunday mornings.

Andrew Neil could possibly be keen for a return to the BBC, following the veteran presenter’s embarrassing stint as chairman and host of a prime-time show on failing channel GB News.

The Scottish presenter famously announced his exit from the BBC to head up GB News, a decision he later called the “single biggest mistake” of his career.

Andrew, 72, is keen to return to TV screens, after walking away from the failing GB News venture in September.

“I don’t want GB News to be the full stop in my broadcasting career,” he has said since his exit from the controversial channel.

Ladbrokes are currently offering odds of 10/1 to make a BBC comeback and replace Andrew Marr.

Clive Myrie, the host of the longrunning BBC quiz shows Mastermind and Celebrity Mastermind, is currently 4/1 with Ladbrokes to take over from Andrew Marr when he departs next year.

Clive has been a regular on BBC News since 2010 and before that, worked with the channel as a correspondent across the globe in cities such as Paris, Washington and Brussels.

In March this year, it was announced that the presenter would become the new host of the flagship BBC Two quiz show Mastermind and its BBC One spin-off show, Celebrity Mastermind, following John Humphrys’ decision to leave after 18 years.

Emily Maitlis is currently the lead anchor of BBC Two’s news and current affairs programme Newsnight, and also covers elections for the BBC in UK, US and Europe.

Ladbrokes are offering odds of 6/1 for the broadcaster to take over the reigns on The Andrew Marr Show next year.

Over the years, Emily has interviewed a number of high profile political figures – including Donald Trump and President Bill Clinton.

The BBC presenter was also the one who interviewed Prince Andrew when the Duke of York infamously mentioned dining out at Pizza Express.

Since 2017 Amol Rajan has been a familiar voice on BBC Radio 2, providing holiday cover for many presenters including Jeremy Vine, Simon Mayo and Zoe Ball.

The BBC’s media editor is also a presenter on the Today programme on Radio 4, as well a frequent guest on the judging panel of MasterChef.

Amol, who has occasionally presented The One Show over the years, is tipped as 7/1 to replace Andrew Marr next year.

Ladbrokes also list Sophie Raworth as 7/1 to be the new face on The Andrew Marr Show.

The broadcaster is a regular during political events and often presents the BBC’s Election Night coverage.