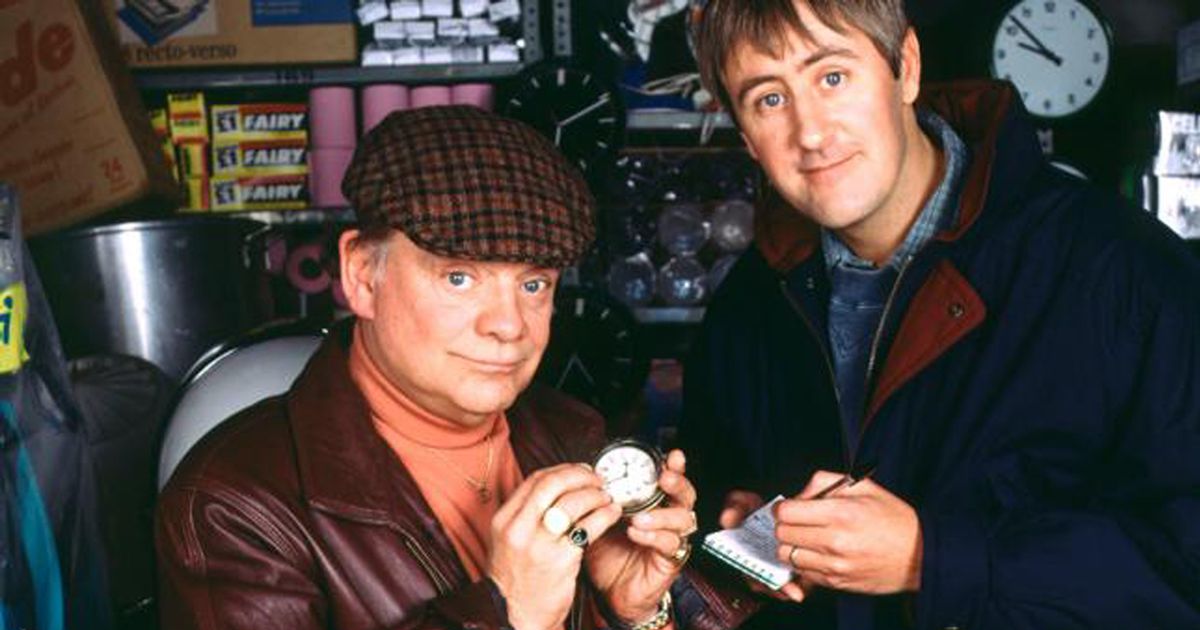 Only Fools and Horses first hit our screens four decades ago and has been the centre of British TV ever since.

The laugh out loud comedy, created and written by the late great John Sullivan, centred around the chaotic lives of wheeler-dealer Del Boy Trotter and his younger brother Rodney.

A staggering ratings hit, the legendary show still holds the record for the highest UK audience for a sitcom episode – with 24.3 million viewers tuning in for ‘Time on Our Hands’ in 1996.

It was such a popular sitcom that it led to a number of spin-offs, including The Green Green Grass, prequel Rock & Chips and even a musical adaptation in 2019.

Stars such as David Jason and Nicholas Lyndhurst became instant household names as they delved through their trials and tribulations.

Following the sad news that actor Patrick Murray, who starred as Mickey in the sitcom, has been diagnosed with cancer, here, we take a look at where the stars of Only Fools and Horses are now.

Patrick Murray – better known as Mickey Pearce on the much-loved show revealed on Tuesday that he has a tumour in his lung.

Taking to Twitter, the star wrote: “Naturally I wanted to keep my own health problems private, but failing to fully endorse this ad would be selfish.

“Thanks to my ultrascan I have a fighting chance.

“It showed my organs needed further investigation and tumours were spotted.

“This led to a PET scan which covers a much larger area.

“To my wonderful surprise these lesions were not cancerous but the scan did find an early-stage cancerous tumour in my lung. This has since been removed.”

He went on to say that he wouldn’t have been able to tweet his message if he hadn’t have had the ultrasound and urged people to get checked before he thanked the NHS for their hard work.

Patrick made a total of 20 appearances on the show and went on to land roles in big-screen productions, including The Firm and Curse Of The Pink Panther.

After his acting career, he became a taxi driver in Kent before quitting work altogether amid his battle with Chronic obstructive pulmonary disease.

The sarcastic salesman was always up to some sort of scam
(

One of the most iconic characters in the history of television, Del Boy was the charismatic trader who could sell just about anything to anyone.

The sarcastic salesman was always up to some sort of scam before he eventually decided to settle down with his wife Raquel.

Although he made a household name for himself as Del Boy, Sir David Jason was actually only considered for the part after the original star who was cast for the role turned it down.

David made the part his own, even introducing Del’s cheap gold jewellery and trademark camel coat on a whim.

He has indicated he would love to take up the role of Del Boy one last time.

Sir David has was knighted for services to acting and comedy in 2005 and has won four BAFTAs, four British Comedy Awards and seven NTAs.

More recently, he appeared as Detective Inspector Jack Frost until retiring from the role in 2010 and has also starred in Granville, Open All Hours and The Darling Buds of May.

Rodney, who was played by Nicholas Lyndhurst, played Del Boy’s awkward and sometimes ‘dumb’ younger brother who often fell for his sibling’s pranks and scams.

Having been raised by Del, Rodney was very dependent on his brother during the show.

Although he attempted to lead a much straighter life, and get away from his get-rich-quick schemes, Rodney could never seem to escape his brother’s wrath.

Popular actor Nicholas went on to star in an array of sitcoms including Goodnight Sweetheart, The Two of Us and After You’ve Gone.

Lyndhurst’s family suffered a heartbreaking tragedy in 2020 when 19-year-old son Archie died in his sleep from a brain haemorrhage caused by acute lymphoblastic lymphoma/leukaemia.

The grieving father shared on his painful loss in a statement, saying: “Lucy and I are utterly grief stricken and respectfully request privacy.”

It was recently rumoured that he had quit acting after the tragedy, but t he star’s representatives have since denied this.

His family said in a statement at the time that the actor died “peacefully in his sleep, after a long battle with cancer”.

“It is with heavy hearts that we bring you such sad news,” the family statement read.

“Our dear friend and yours, John Challis, has died peacefully in his sleep, after a long battle with cancer.

“He will always be loved for being ‘Boycie’ and leaves a great legacy of work that will continue to bring pleasure and smiles for many years to come.

John has tragically passed away at 79

John was in his late 30s when he landed the role of Boycie, with the part initially just for one scene before his character became more prominent in the series.

The much-loved actor also starred in its spin-off The Green Green Grass from 2005 to 2009 and the ITV sitcom Benidorm from the seventh series onwards.

Lennard unexpectedly died midway through filming the fourth series in 1988
(

One of the original cast members, Lennard Pearce played Grandad from the very beginning of the sitcom.

Before appearing on the comedy, the actor had been an esteemed stag ester – working alongside the likes of Laurence Olivier and Anthony Hopkins and appearing in plays including My Fair Lady and Much Ado About Nothing.

Grandad was rarely seen out of his armchair in front of his TV sets but he was treated as a butler by Del Boy and Rodney.

Tragically, Lennard unexpectedly died midway through filming the fourth series in 1988 from a heart attack aged 69, leaving the entire cast and crew devastated.

Uncle Albert was introduced into the sitcom after the sad death of Lennard Pearce.

Although he didn’t have much acting experience, actor Buster Merryfield was chosen for the part due to his distinctive white beard.

Buster had been an amateur dramatics actor and didn’t make it his main profession until he was 57.

Buster’s character could be mostly found reminiscing about his wartime experiences with the Royal Navy.

Albert, who was Grandad’s estranged brother, became famous for his catchphrase “during the war…”

Uncle Albert’s death was then written into the next episode as a tribute.

Raquel first appeared in the ‘Dates’ special and was her appearance was intended on being a one-off.

However, she quickly became a permanent character due to the fact producers wanted to bring in more female characters to the sitcom.

The pair remained the central romance on the series and the lovebirds eventually welcomed their son, Damien.

Actress Tessa stayed with the sitcom until it ended in 1996 episode ‘Time on Our Hands’.

The actress has since starred in a number of UK drama’s including Midsomer Murders, Doctors, Casualty, Holby City and Doctor Who
(

She then went on to return for the revival specials from 2001, making her final appearance as Raquel in 2003 special ‘Sleepless in Peckham’.

The actress has since starred in a number of UK drama’s including Midsomer Murders, Doctors, Casualty, Holby City and Doctor Who.

Tess actually got married to co-star Douglas Hodge who played an adult version of her on-screen son Damien in Only Fools special ‘Heroes and Villains’.

The couple have two children together and were a couple for 27 years until they split in February 2013.

Boycie’s wife Marlene first appeared on Only Fools And Horses back in 1985.

Her storyline surrounded the suggestion that she may have had romantic relations with all of her husband’s friends.

There were even rumours circulating in the pub that Del was the father of her child.

Actress Sue Holderness appeared in 20 episodes before going on to star alongside John Challis as Boycie in spin-off The Green Green Grass.

Away from Only Fools, Sue has appeared in many UK shows including Doctors, Casualty, Still Open All Hours and Cold Feet.

Sue shot back onto screen this year as she joined the cast of EastEnders as mysterious newcomer Estelle, who has a run in with Billy Mitchell.