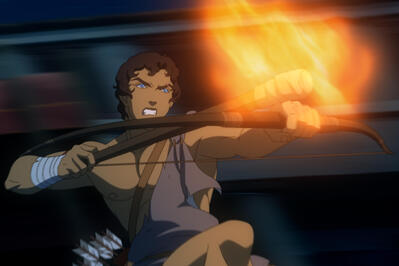 Netflix’s Top 10 list is like a never-ending horse race with shows jockeying for position, fading, then ultimately being sent to the glue factory at alarming rates (we miss you, GLOW!). But because Netflix never reveals proper ratings, it’s pretty much the only way we know whether or not a series or movie is doing well. The list for Wednesday, Oct. 28 indicates that there’s a new series that’s surprising a lot of folks: the American anime Blood of Zeus, a violent retelling of Greek Mythology. It debuted on the list today in the fourth spot, knocking the bad movie Rebecca off the list for the first time. The top three spots went unchanged, with the excellent miniseries The Queen’s Gambit sticking in the top spot for the third day in a row.

A Germanic tribe battles the Romans in 9 A.D. in this German-language historical epic. It should hold you over until Vikings: Valhalla comes to Netflix, as it’s definitely a show you’d recommend to Vikings fan. (Yesterday’s rank: 2)

This moving animated family musical is inspired by a Chinese folktale about the moon goddess Chang’e. A girl whose mother died builds a rocket ship to the moon to prove that the moon goddess is real. Oscar winner Glen Keane directs, and the voice cast includes Philippa Soo, John Cho, Margaret Cho, and Ken Jeong. (Yesterday’s rank: 3)

For fans of: The video game Hades, the anime Castlevania | Is it good?: It’s ambrosia for fans of anime

The newest original anime from Netflix is this violent new take on Greek mythology following a young man who learns he’s the son of Zeus and must fight off an army of demons. It’s a cartoon, but it ain’t for kiddos! (Yesterday’s rank: n/a)

The popular Netflix continuation of the true crime series returns with more of those grisly details of murder and mystery that you just can’t get enough of. It goes down easy if you like to be creeped out. (Yesterday’s rank: 4)

6. The Haunting of Bly Manor

Season 2 of the moody, emotionally heavy horror anthology (the first was The Haunting of Hill House) is loosely based on Henry James’ The Turn of the Screw. If you don’t go into it expecting a Hill House redux, you won’t be disappointed, because Bly Manor is really good, but it’s different. [TV Guide review] (Yesterday’s rank: 5)

Grand Army, adapted by playwright Katie Cappiello from her play Slut, follows five youths from different social circles at a Brooklyn high school as they confront racial and social issues, sexuality and sexual assault, and other controversial topics. (Yesterday’s rank: 7)

8. My Next Guest Needs No Introduction with David Letterman

For fans of: Applesauce, milk, teething rings | Is it good?: I don’t know, ask a baby

Need some sweet relief from that crying toddler of yours? Park them in front of this sing-along series. (Yesterday’s rank: 8)

For fans of: Heartwarming comedy, maple syrup, Catherine O’Hara | Is it good?: It’s one of the best

The critics’ darling has finished its six-season run, but not before sweeping the 2020 Emmys comedy categories. It follows a rich family who loses everything… except the small town they bought as a joke. (Yesterday’s rank: 10)