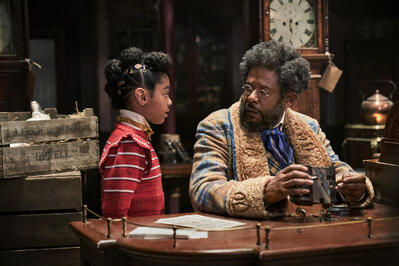 The Netflix Top 10 list won’t tell you how many people are watching a show, but it will tell you which shows people are watching the most. The Top 10 list for Sunday, Nov. 15 sees The Queen’s Gambit holding strong in the top spot, but the new holiday musical, Jingle Jangle: A Christmas Journey, is coming in hot at No. 2. Ryan Murphy’s anthology series American Horror Story has made its way into the ranking, while Chappelle’s Show has dropped to the bottom of the list.

Budding superstar Anya Taylor-Joy (she’s been cast as young Furiosa in the next Mad Max movie) stars in this literary adaptation as Beth Harmon, a brilliant but troubled chess champion in 1950s Kentucky. She was an orphan who, in her youth, developed an incredible skill for the game but also a debilitating addiction to pills, which quiet her obsessive mind. It’s a detailed character study of brilliance and madness that’s usually reserved for male characters. It comes from one of Netflix’s go-to limited series producers, Godless‘ Scott Frank. (Friday’s rank: 1)

Legendary toymaker Jeronicus Jangle (Forest Whitaker) loses everything after he’s betrayed by his friend (Keegan-Michael Key), who steals his most prized creation. Jangle’s granddaughter (Madalen Mills), with the help of a long-forgotten invention, sets out on a holiday adventure to get it back. There’s music, dancing, about a million celebrity cameos, and a whole lot of Christmas spirit, if that’s what you’re in the market for. (Friday’s rank: n/a)

This limited docuseries tells the story of Sean Ellis, a Black man who was wrongfully convicted for the murder of a white Boston police officer. The timely documentary explores issues of police corruption and racism in the judicial system, and if you care about injustice, it will make you sick. (Friday’s rank: 6)

Ewan McGregor, Naomi Watts (who was nominated for an Oscar for her performance), and young Tom Holland star as a family who gets separated during the devastating 2004 Indian Ocean tsunami and have to struggle to survive and find each other again. It’s a powerful true story. (Friday’s rank: 4)

For fans of: Ryan Murphy, frequent pop culture references | Is it good?: Some seasons are better than others

Season 9 of Ryan Murphy’s horror anthology series recently dropped on Netflix. 1984 is set at a summer camp and pays homage to ’80s slasher movies, and if you’re already a fan of American Horror Story, you’ll be happy to hear that the nostalgia-seeped setting “provided the perfect setup for the signature one-liners and pop culture references” the show has become known for. If you’re not already a fan, 1984 maybe isn’t the best season to start with, but it’s still fun. (Friday’s rank: n/a)

Benedict Cumberbatch voices Dr. Seuss’ iconic green guy who learns to love Christmas. You know the story, and this CG adaptation doesn’t add much to it. But it doesn’t detract anything from it, either. It’s better than the Jim Carrey version, but not as good as the original version. (Friday’s rank: 9)

Dash (Austin Abrams) and Lily (Midori Francis) court each other by leaving notes to each other with comfort zone-expanding dares in a secret book at Manhattan’s famous Strand bookstore. It’s cute and will put you in a cheerful mood. [TV Guide review] (Friday’s rank: 2)

For fans of: Wholesome cooking | Is it good?: Yes, and it has a huge fanbase

The Great British Baking Show is in full holiday mode, which means there’s even more cheer than usual, and the bakers are all dealing with the usual hilarious blunders and missteps that have helped earn the series its status as a cultural phenomenon. It’s also, if I’m being completely honest, the perfect show to zone out to. (Friday’s rank: n/a)

For fans of: Prestige film, the Oscars | Is it good?: It might just move you to tears

Screen icon Sophia Loren stages her comeback in this film about a Holocaust survivor who strikes up a bond with a young boy after he robs her. Loren is outstanding in it, and rightfully getting a lot of attention for her performance, so you may want to keep your eyes on her when Oscar season rolls around. (Friday’s rank: n/a)

The legendary comedy show is now on Netflix. It’s still screamingly funny after all these years. What’s your favorite Chappelle’s Show quote? Mine is “He’s a habitual line-stepper.” (Friday’s rank: 4)