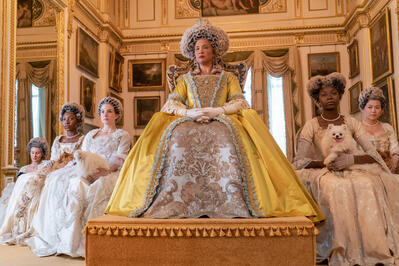 The Netflix Top 10 list won’t tell you how many people are watching a show, but it will tell you which shows people are watching the most. The Top 10 list for Monday, Jan. 11 sees Shonda Rhimes’ period piece Bridgerton and the Karate Kid continuation series Cobra Kai keeping their respective holds on the top 2 spots. Rounding out the top 5 are the new French crime series Lupin, the creepy docuseries Surviving Death, and the Adventures of Sharkboy and Lavagirl in 3-D sequel We Can Be Heroes.

Originally a YouTube series, Cobra Kai — now in its third season, the first as a Netflix original — is the continuation of the Karate Kid film series that you didn’t know you needed. The twist here is that it’s mostly told from the perspective of Johnny Lawrence (William Zabka), whose life never really recovered after Daniel LaRusso (Ralph Macchio) crane-kicked his nose to the other side of his face. (Yesterday’s rank: 2)

Omar Sy stars as Assans Diop, a man who is essentially a French Bruce Wayne if Batman was more of a cat burglar than dark knight. Diop starts the series off trying to steal a valuable necklace from the Louvre with a grand heist as part of a revenge plot against the wealthy family responsible for the death of father several years prior. From there, the heists and trickery get even more fun, and are always performed under the guise of being the good guy. (Yesterday’s rank: 3)

Want to see something freaky? Directed by Ricki Stern (Surviving Jeffrey Epstein), this docuseries tries to ask whether there’s an afterlife (no biggie!) by going deep on near-death experiences, psychic mediums, and other spooky stories. It’s not enough to win over any sensible skeptics. (Yesterday’s rank: 7)

Nicolas Cage hosts this educational series that tells you where all your favorite expletives came from. Learn something, and delight in the joy of hearing Cage say the F-word a bunch of times. (Yesterday’s rank: 4)

7. Pieces of a Woman

The headline of this gutting, brutal movie about a home birth gone horribly wrong is Vanessa Kirby’s dazzling performance as a woman coping with unthinkable tragedy. After its intense, hard-to-watch first act, the movie gets a little aimless as Kirby’s Martha and her partner, Sean (Shia LaBeouf), struggle with the aftermath of their loss. But Kirby is unforgettable, if you can brave the pain. (Yesterday’s rank: 6)

A girl and her cat sidekick go on a series of adventures inside a dollhouse, and kids are almost guaranteed to enjoy watching them do so. (Yesterday’s rank: 8)

This series, which is a spin-off of the Bad Boys franchise, stars Gabrielle Union and Jessica Alba as two Los Angeles cops who recently became partners. It’s a pretty standard police procedural that never really matches the energy of the movies it’s inspired by. (Yesterday’s rank: n/a)