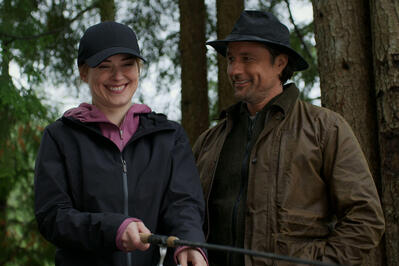 The Netflix Top 10 list won’t tell you how many people are watching a show, but it will tell you which shows people are watching the most. The Top 10 list for Friday, Dec. 4 finds Virgin River Season 2 steadily holding on to its No. 1 spot, followed by a pair of action movies — Jennifer Garner’s Peppermint and Bruce Willis’ Marauders, the only new addition to the list. The very cool docuseries Alien Worlds and the great The Queen’s Gambit round out the top 5.

Adapted from the Virgin River novels by author Robyn Carr, the romantic drama stars Alexandra Breckenridge as Melinda “Mel” Monroe, a midwife and nurse practitioner from Los Angeles who moves to a beautiful but remote Northern California town following a series of traumatic heartbreaks. It all has a very Hallmark vibe to it, but in a good way! (Yesterday’s rank: 1)

Jennifer Garner plays a mother on a mission to exact her revenge on the cartel that killed her husband and daughter. It was critically panned and is full of typical action movie clichés, but Garner’s performance makes it watchable. (Yesterday’s rank: 2)

You don’t have to have seen it to know exactly what you’re getting with this 2016 crime thriller, which stars Bruce Willis as the president of a bank chain that keeps getting robbed and Christopher Meloni as the FBI special agent heading up the investigation. It’s clichéd, but if you’ve been missing Elliot Stabler since Meloni’s SVU spin-off was pushed back, we’re not here to judge. (Yesterday’s rank: n/a)

If you’ve ever watched Planet Earth and thought, “I want that, but scarier,” Alien Worlds is the show for you. Netflix’s new docuseries doesn’t introduce us to any actual aliens (unfortunately), but it uses CGI to imagine what life on other planets might look like. Sometimes it veers a little too far into sci-fi territory, but it’s a fascinating (and terrifying) exploration of what could exist beyond our world. (Yesterday’s rank: 8)

Budding superstar Anya Taylor-Joy (she’s been cast as young Furiosa in the next Mad Max movie) stars in this literary adaptation as Beth Harmon, a brilliant but troubled chess champion in 1950s Kentucky. She was an orphan who, in her youth, developed an incredible skill for the game but also a debilitating addiction to pills, which quiet her obsessive mind. It’s a detailed character study of brilliance and madness that’s usually reserved for male characters. It comes from one of Netflix’s go-to limited series producers, Godless‘ Scott Frank. (Yesterday’s rank: 5)

The ambitious, decades-spanning drama series about Queen Elizabeth II is back for its second season with Olivia Colman in the lead and its fourth season overall, and it adds two pivotally important characters into the mix: Margaret Thatcher (the great Gillian Anderson) and Princess Diana (Emma Corrin), who both clash with the Queen. Their addition breathes fresh life into the series, which remains one of the grandest on all of television. (Yesterday’s rank: 7)

In the sequel to 2018’s The Christmas Chronicles, Kurt Russell and Goldie Hawn return as Santa and Mrs. Claus, which is pretty delightful all on its own. There’s also a plot here, though, with Kate Pierce (Darby Camp), who has grown into a cynical teen, reuniting with the Clauses to help save Christmas after it’s threatened by an elf gone bad. (Yesterday’s rank: 6)

For fans of: Survival thrillers, anxiety | Is it good?: Yes

A college student takes a wrong turn on her way to a job interview, leaving her stranded in an unfamiliar forest. She suddenly finds herself being pursued by two ruthless men and is forced to hide out with a mysterious meth cook in order to survive. It’s a wild ride. (Yesterday’s rank: 4)

For fans of: Ryan Phillippe, corny action movies | Is it good?: Not particularly

Ryan Phillippe plays a man named Vic Davis tasked with rescuing his son’s crush, who is also the daughter of a Supreme Court justice, after she gets kidnapped. Since she’s someone else’s child, The 2nd puts a spin on the usual “daughter gets taken” plot. (Yesterday’s rank: 3)