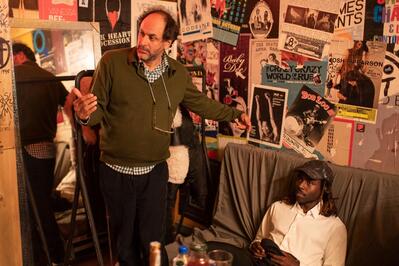 [Warning: The following contains spoilers for the Season 1 finale of We Are Who We Are. Read at your own risk!]

The We Are Who We Are Season 1 finale fades out on the sounds of Prince’s “The Love We Make,” as Fraser (Jack Dylan Grazer) and Caitlin (Jordan Kristine Seamón) share a kiss before running off together into the unknown. Caitlin has just one day before her family moves away to another base (Fraser’s mom, Sarah, played by Chloë Sevingy, had them relocated after the lives of the two families became more intertwined than anyone had bargained for), and the two have spent their last hours together at a Blood Orange concert, having gone on two separate journeys before ultimately coming back together in the show’s final moments. We don’t see where they’re going when they hurry away, and Luca Guadagnino, the show’s director, co-creator, and co-writer, doesn’t allow us to find out: His camera pans up to the sky, and the credits roll. It feels like an appropriate ending for a series that never wanted to give away all the answers.

That, as Guadagnino told TV Guide, was completely intentional. The HBO drama was his first foray into television, but as any fan of his films, which include Call Me by Your Name, Suspiria, and I Am Love, knows, he always prefers not to tell the audience everything. “I like people to think of how they feel,” he explained while discussing crafting the show’s finale.

TV Guide caught up with the director over Zoom from his home in Milan, Italy, to discuss everything from Fraser and Caitlin’s relationship to those Timothée Chalamet and Armie Hammer cameos to whether there’s potential for a second season.

Why did you decide to set the show during the 2016 election? Was it always the intention to air it right now, during the 2020 election?
Luca Guadagnino: I didn’t plan to air the last episode the day before the election day. It’s a beautiful coincidence, to be honest. But we did plan to set the series during that six months before and after the election of 2016. On the one hand, we needed perspective in order to be able to tackle it contemporarily so we could use our knowledge of that semester. At the same time, there is a sort of telling truth in the fact that this passage that these characters go through — both the characters who, being adolescent, have to go through a passage, but also the adults — I think it is telling that that happens in a very important passage also for America, when the symbolic utopian possibility of an Obama second term went into Trump’s first [term].

Life has a strength, a force, something so fierce that cannot be tamed by the cruel politics that becomes the news at the same time. And I like the idea that the propulsion that those characters have, specifically Caitlin and Fraser, is symbolically and emotionally an antidote to the brutal realism of the aftermath of the election of Trump.

I loved that the majority of the finale is set around, and at, a Blood Orange concert. I read an interview with Dev Hynes where he said he actually did do a 2016 concert in Italy that you recreated for the show. What’s the significance of that concert to Fraser and Caitlin?
Guadagnino: Well, it’s a date that Fraser created for them that they all forgot about, but not Fraser. And it’s a sort of capacity of complete freedom — they’re free. They are free from everyone, including one another, because they get lost in the concert and they separate, and yet the energy of that concert, of that sense of freedom, paves the way to the need of being together. And I think music has that quality.

And the Blood Orange song, “Time Will Tell,” plays such a huge role in the season, too. What made you choose that song?
Guadagnino: I like the song lyrics in particular. “Come into my bedroom, come into my bedroom,” I think it’s this plea of connection. It’s beautiful.

When I spoke to Jack before the season aired, he described Fraser as “a young little Luca.” Do you agree with that?
Guadagnino: He’s too generous. I try with my work, somehow, to find ways of me through everything, not only one character. But at the same time, I don’t want to be that kind of person who makes everything only because I want to express part of myself. So I like what Jack says, but maybe not.

In the finale, Fraser tells Caitlin that Mark, this guy from New York he’d been talking about so lovingly all season, doesn’t actually exist in the way Fraser said he did. What was the thought process behind giving him such a private, idealized crush?
Guadagnino: I think Fraser wants to be welcomed in the gaze of another. I think he is really in need of a male figure in his life, and he tries. Also, I think he’s such a bright, young intellectual that the projection in itself stimulates him. It’s the sort of act of creation that stimulates him. It’s a testament to his solitude, and at the same time, it’s something that stimulates him.

Why did you decide to have them kiss in the finale, which was something they both swore they’d never do?
Guadagnino: Well, because Fraser realizes that this is the person he wants to be with, and Caitlin realizes the same thing, and to kiss is an act of faith in the other.

While I watched the show I thought a lot about something Greta Gerwig said about making Little Women, which was basically, “Childhood is something you go back to because anything is possible, and adults have more limited options.” Is that kind of contrast what you were going for when you were developing the kids’ story and the adults’ story?
Guadagnino: In a way, it’s a sense of the limit that we give to ourselves. I’m interested not just in the limit age gives you, but the limit you give yourself, given that you think those limits are needed in your age, in your given age. So it’s about how you create your own parameters of limits more than anything else.

I know you’re famously not online, but I’m sure you know that the internet kind of lost its mind when they found out about those Timothée Chalamet and Armie Hammer cameos in the show. How did those come about?
Guadagnino: Well, I’d been visited on set by many friends that I love, including Timmy and Armie, and I ask it of all of my friends: “Put something on and be in front of the camera.” So we have Timmy, we have Armie, we have Jasmine Trinca, the great Italian actress. We have many, many friends.

So it’s just you having great friends in high places.
Guadagnino: Yeah, it’s fun. You know, to be on a movie set, it’s quite tiring and not a very comfortable place, so whenever you have friends around, you want to have fun.

Did you have a favorite part of creating the show?
Guadagnino: I keep in my heart the moment in which Elliott Hostetter, the production designer, showed me the drawing of a lion in the library set, in which I asked him to put the name of my partner, Ferdi. That was a sweet moment. It is now bitter because we are not together anymore, but I keep thinking about that. The impermanence of things, and at the same time, the testament of things.

Do you have any plans to make a second season?
Guadagnino: It’s up to our wonderful networks.

I know you can’t give away what you’re thinking, but if you could describe what you envision for a potential Season 2 in one word, what would you choose?
Guadagnino: Hope.

We Are Who We Are is now streaming on HBO Max.