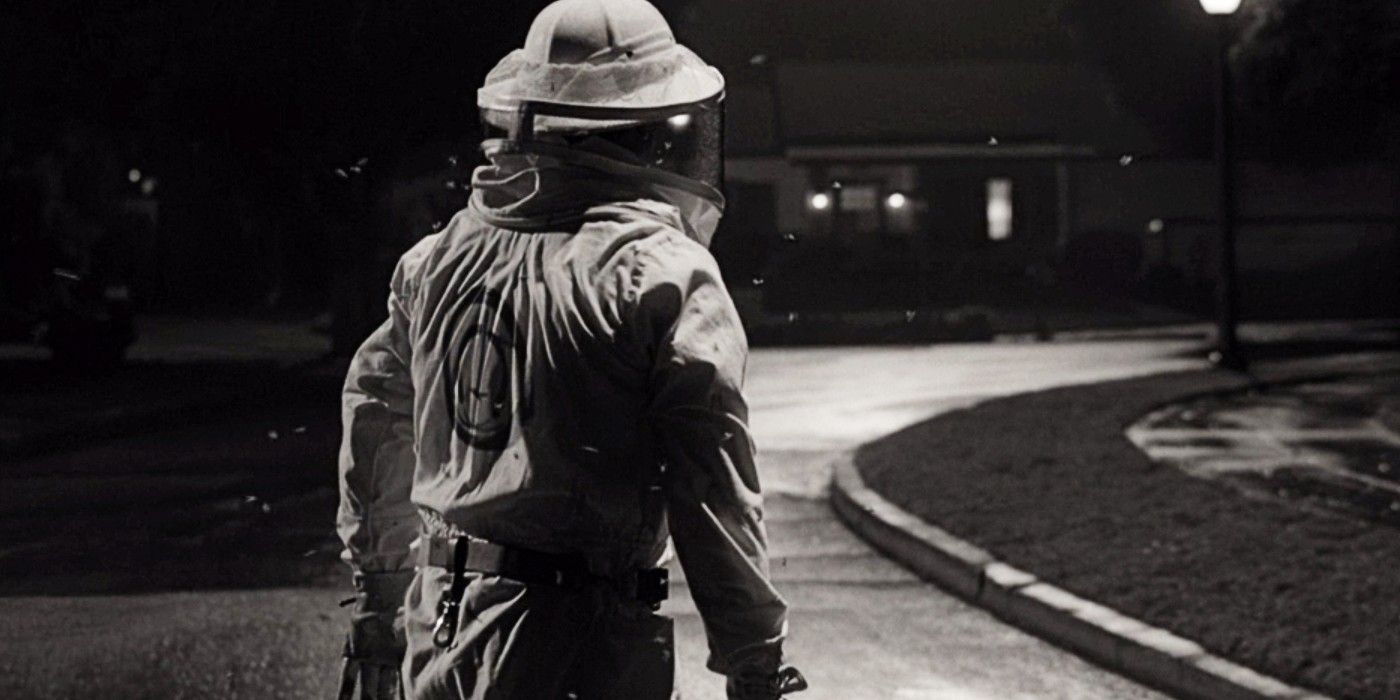 Warning! Spoilers ahead for the WandaVision premiere.

New WandaVision behind-the-scenes video builds on the mystery surrounding the beekeeper with a new look at the unidentified character. Marvel Studios is officially back after a hiatus that was unexpectedly extended by the coronavirus pandemic. The first project out of Phase 4 is Elizabeth Olsen and Paul Bettany’s Disney+ series chronicling what appears to be a perfect married life in the suburbs.

The original Marvel Studios production is also its inaugural TV show as part of their expansion scheme from the big to the small screen. Described as a love letter to classic American sitcoms, the first two episodes of WandaVision are now available to stream on Disney+ for a super-sized premiere, followed by one outing each week — the same release scheme the platform had for The Mandalorian. Aside from its titular characters, the show also features a stacked supporting cast such as Jimmy Woo (Randall Park), Darcy Lewis (Kat Dennings), Monica Rambeau (Teyonah Parris), and Agnes (Kathryn Hahn). At the end of the show’s second episode, however, WandaVision debuted a new mysterious key player who’s dressed as a beekeeper.

Now, Marvel Studios is driving up the interest in this figure with the release of a behind-the-scenes clip that includes a new look at the beekeeper. At the 1:32 mark, the video shows Wanda and Vision from the perspective of the mystery character — a switch-up of what went down in the latest WandaVision episode. Later on, it also features him crawling and crossing the barrier that separates Wanda’s fake world from reality, potentially before emerging from the manhole. Check out the video below:

The WandaVision episode doesn’t say much about the identity of the character but the show’s credits reveal that he is played by Zac Henry who has been in multiple Marvel projects to date, primarily as a stunt rigger. His most notable appearance was in Agents of SHIELD where he portrayed TAC Team Agent #1. Now, considering that Marvel Studios cast someone who’s relatively unknown, but ironically, has also been in various projects from them before, it’s safe to assume that his actual identity isn’t what’s important, but what he represents in the show. At the back of his white overalls is the SWORD logo which means that he’s somehow affiliated with the organization, and since Westview is most likely a fantasy world created by Wanda, it’s possible that he’s sent there to reach out to her. In an effort to preserve the illusion of the perfect life, Scarlet Witch quickly altered time so Vision doesn’t discover who the beekeeper is and what he wants.

While the first two episodes of Wandavision did a great job of making it feel very different from the usual MCU fare, mining inspirations from I Love Lucy and Bewitched, it’s clear that it’s building toward something else. As the new behind-the-scenes video suggests, one cannot take whatever happens in Westview as it is because chances are there is something darker unraveling. With seven episodes left for its first season, the Disney+ show has plenty of time to build on its core mystery.