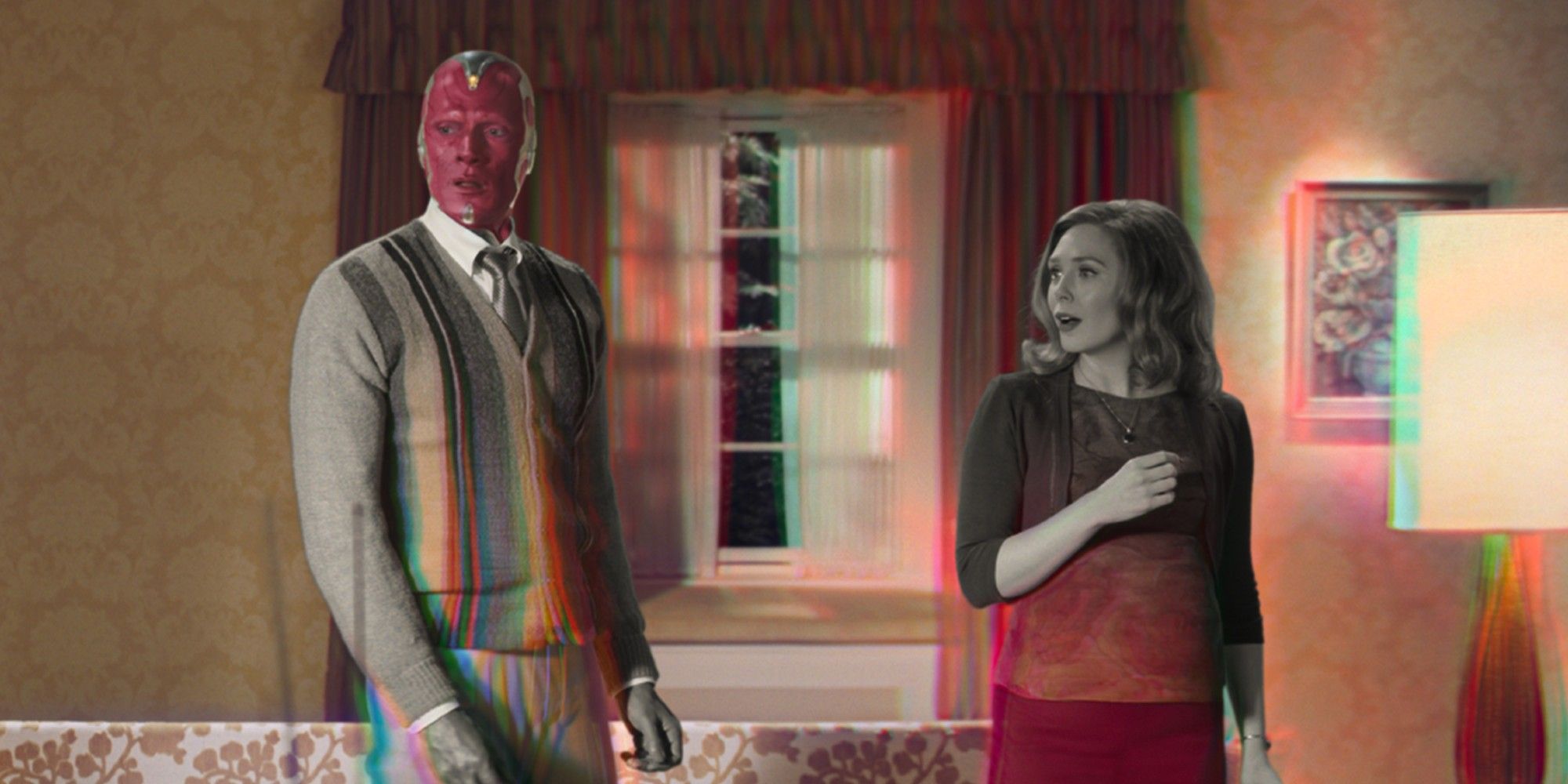 Marvel Studios unveils a WandaVision trailer, revealing a new look at the upcoming Disney+ show featuring Scarlet Witch (Elizabeth Olsen) and Vision (Paul Bettany). Both introduced in Avengers: Age of Ultron, Scarlet Witch and Vision have developed a romantic relationship throughout their appearances in the Marvel Cinematic Universe. However, in the climactic moments of Avengers: Infinity War, Scarlet Witch was forced to kill Vision in order to destroy the Mind Stone – only for Thanos (Josh Brolin) to bring him back and kill him again. Though many heroes killed in Infinity War returned in Avengers: Endgame, Vision wasn’t one of them.

As such, WandaVision is expected to explain how Vision is back and finally place a focus on Scarlet Witch, who’s been a supporting character in the MCU since her introduction. Previous WandaVision trailers have revealed plenty about the upcoming Disney+ show, including the series’ format of modeling itself after classic sitcoms through the decades, which are seemingly connected to Scarlet Witch’s powers and the multiverse. In addition to Olsen and Bettany, WandaVision will star Teyonah Parris as adult Monica Rambeau and Kathryn Hahn as Agnes – who’s been speculated to be Marvel Comics villain Agatha Harkness. Now, a new special look at WandaVision is unveiled.

During the Disney Parks Magical Christmas Celebration special on ABC, a new WandaVision trailer was revealed. This new look at the MCU show arrives just two weeks before the WandaVision series premiere releases on Disney+, Friday, Jan. 15. Check out the new teaser below.

The first part of the new WandaVision trailer focuses on Wanda and Vision as a couple, particularly how they’re a strange pair with no anniversary, song or rings. That’s not surprising, of course, since they’re stuck in a strange sitcom-like world. There’s bound to be some oddities in their life. Poking holes in the illusion are both Hahn’s Agnes, who stops a “scene” to start again, and Parris’ Monica, who shows up and doesn’t know who she is. Agnes also appears astonished by Wanda and Vision’s twins, which indicates both that the sitcom world may be her creation and that the couple are doing things she didn’t expect, like having kids. Marvel is still not showing the twins themselves, but considering the few scenes depicting Wanda and Vision with their kids in the various trailers, it’s likely the children will have a key role in the show itself.

Still, in true Marvel fashion, fans will have to wait until WandaVision premieres before learning everything the studio has up its sleeves. As with previous WandaVision trailers, this latest preview doesn’t offer much new footage and what footage is included, is very similar to what’s already been released. Of course, that means there’s still plenty left unseen from the episodes. Thankfully, there’s only two weeks left until WandaVision premieres on Disney+ so fans don’t have to wait too much longer to find out exactly what Marvel Studios’ very first show has in store.