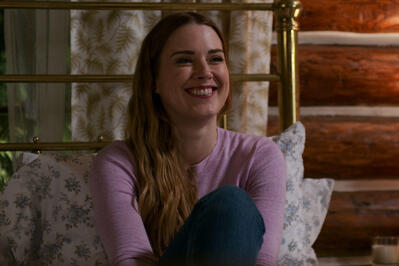 We can finally exhale, Virgin River fans. TV Guide has confirmed that the charming series will return for Season 3 on Netflix, which is a gigantic relief after Season 2 ended with such a shocking cliffhanger.

Season 3 will also consist of 10 episodes and introduce some new faces to the drama. Zibby Allen joins Virgin River as Brie, Jack’s lawyer sister who is described by Netflix as “hard-charging, ballsy, and a whole lot of fun.” At first it was concerning to learn that Jack’s (Martin Henderson) sister would be coming to town considering his state at the end of Season 2, but if she’s a whole lot of fun, that has to mean that he’s going to be alright, right?

Stacey Farber will also come to town as Tara Anderson, Lily’s (Lynda Boyd) daughter who is helping raise baby Chloe. The series regular and recurring guest star casts are also set to return, including Daniel Gillies which means we will be getting more flashbacks to Mel’s (Alexandra Breckenridge) past life in LA.

When the show returns, not only will fans find out if Jack survived the attack at the end of Season 2, but also what’s going on with Doc (Tim Matheson), and what Preacher (Colin Lawrence) is going to do about that job in San Francisco now that he’s charged with taking care of Paige’s (Lexa Doig) son. We have so many questions that need answers!

Virgin River Seasons 1 and 2 are now streaming on Netflix.