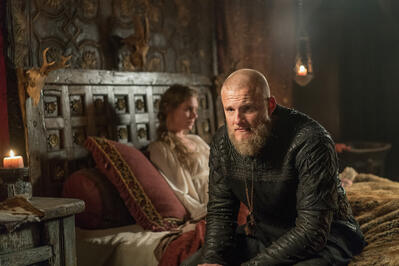 Big day for all Vikings heads: The wait for the final episodes is almost over.

Vikings Season 6 Part 2 will premiere Wednesday, Dec. 30, on Amazon, rather than premiering on the History Channel as usual, Deadline reports. All of the final 10 episodes of the historical drama will drop on Amazon on the same day. Vikings will still air the second half of its last season on History, though it will be at a later date that has not been announced yet.

Back in July, the cast — including Travis Fimmel, Katheryn Winnick, Alexander Ludwig, Clive Standen, Jordan Patrick Smith, and creator Michael Hirst — reunited at Comic-Con to reminisce about their time making the show, and they gave fans a look at one of the last episodes. In the clip, Ivar (Alex Høgh) prepares to go to battle before seeing his older brother Bjorn, who Ivar believed was dead.

Speaking about what fans should expect, Hirst said, “The characters who we all — including me — have grown to love will all have their fates decided. Whether they live or die is of course in the hands of the gods — although I had a hand in it, too.” He went on to add, “I think the conclusion of the saga is deeply satisfying, a proper and meaningful ending. And I hope all of our fans will feel the same way. I tried to do justice to all of my characters, and I hope I’ve succeeded.”

While Vikings is set to wrap up at the end of the month, the drama will live on through a Netflix spin-off, Vikings: Valhalla, which takes place 100 years after the events of the original series.