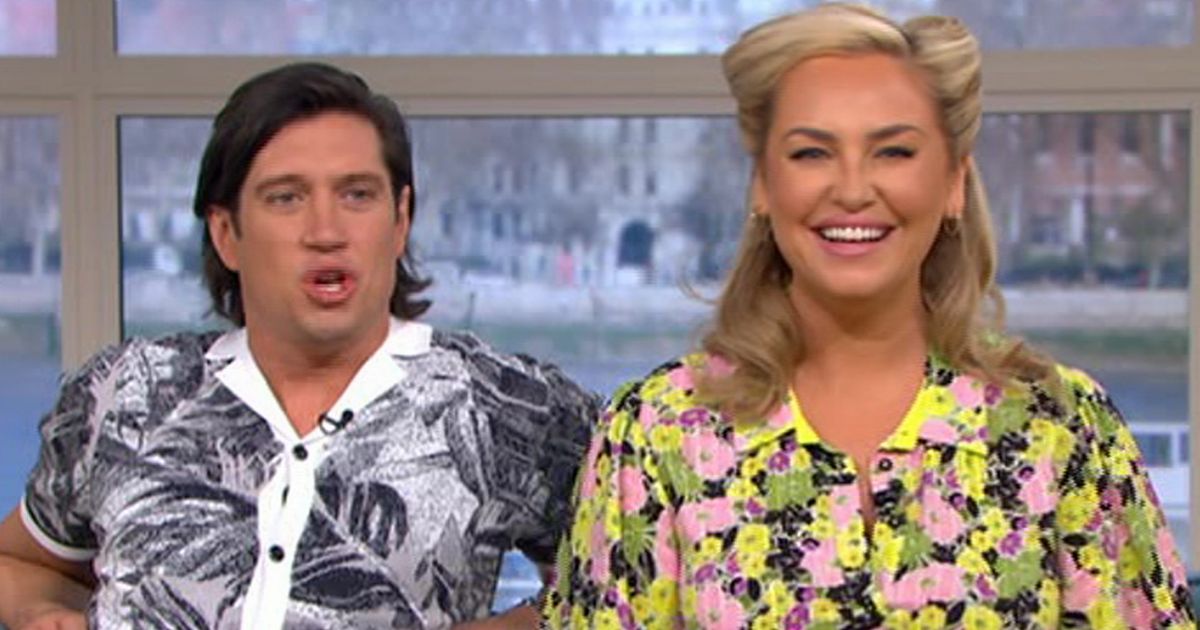 Vernon Kay took a cheeky swipe at This Morning producers during Tuesday’s show for guilt-tripping him into going to the gym by inviting hunky guests on the show.

The 47-year-old, who is standing in for regular hosts Holly Willoughby and Phillip Schofield alongside Josie Gibson, was reduced to giggles by a topless snap of guest Alessandro Cinquini.

The Italian hunk appeared on the programme remotely from Florida alongside girlfriend Nicole Hayden to open up about their experiences of catfishing online.

After Nicole told the TV presenters how she had started dating Alessandro after being ‘catfished’ with his photos by a stranger, Alessandro detailed having his identity stolen for the purpose.

As This Morning showed ITV viewers Alessandro’s beach snap in the middle of the conversation, Josie quipped: “No wonder you were clicking Nicole. That is a lovely picture.”

Meanwhile, Vernon was equally awed by the “100 percent Italian” fitness fanatic, particularly after he gushed over a shirtless Dr Scott on Monday’s programme.

He said: “Two days in a row! Dr Scott yesterday and now this. I’m just floored by blokes with huge tremendous rigs.

“Look at this guy. This is subliminal. Alright, I’m going to go to the gym. I get it This Morning. Crikey.”

The TV presenter could not help but swoon over the TV doctor, as he presented a segment from a beach in Costa Rica, wearing just a pair of swimming trunks on Monday’s show.

Back in the studio they replayed the clip slowed down and jokingly added the Baywatch music over the top.

Vernon was equally awed by the “100 percent Italian” fitness fanatic
(

His co-host Josie Gibson said: “I think you enjoyed that more than me.”

Vernon replied: “I want biceps like that,” later adding: “That is what we call a man.”

This Morning fans at home were in full agreement, taking to Twitter to thank Vernon for backing them up.

Josie quipped: “No wonder you were clicking Nicole. That is a lovely picture.”
(

One posted: “Hahaha Vernon there doing the Dr. Scott fans of Twitter justice” followed by a string of applause emojis.

Another chimed in to say: “Vernon simping for Dr Scott” as others voiced their approval for the shirtless segment, with one writing: “I badly need some partially naked Dr Scott.”

A second echoed: “No tweets from the women on here while Dr Scott is on!!”