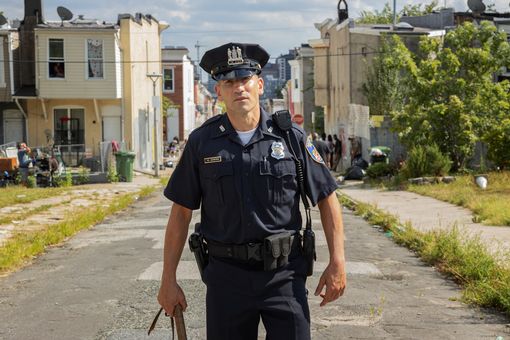 They were the elite police officers who were supposed to rid one of America’s most violent cities of its guns and gangs.

But instead of tackling criminals, Baltimore’s Gun Trace Task Force were actually responsible for its biggest ever crime wave.

In a reign of terror that lasted at least three years, the group of rogue police officers were involved in multiple armed robberies and burglaries, stealing and selling drugs and weapons, extortion and racketeering.

By the time they were finally found out in 2017, and eight of the nine plain clothed officers in the GTTF were charged, the squad had added thousands of their own crimes to the city’s statistics.

We Own This City is on Sky Atlantic now
(

As the Maryland attorney Rod Rosenstein described it when the group was finally brought down: “This is not about aggressive policing, it is about a criminal conspiracy. These are really simply robberies by people wearing police uniforms.”

One of the most shocking instances of police corruption in America, the scandal will now be retold in a new Sky Atlantic miniseries, We Own This City, written by David Simon, the creator of acclaimed crime drama The Wire.

The series is based on a book by Justin Fenton, who worked as a reporter at The Baltimore Sun newspaper – the same job Simon had early in his career – and whose investigations helped expose the police racketeering ring.

The GTTF was set up in 2007 as part of mayor Martin O’Malley’s quest to tackle the city’s high murder rate.

The series examines the unit’s devastating impact on the city of Baltimore, where drug prohibition and mass arrests were championed
(

Some of the Baltimore Police Department’s most successful officers joined the unit, tasked with clamping down on targets in the city seen to be “Bad guys with guns”.

But within a few years the crime rate, rather than going down, started to soar. Ten years later, in 2017. the city reported 343 killings, bringing it to a record high of 56 homicides per 100,000 people.

In 2015 the Drug Enforcement Administration began to track one of the officers of the unit, Momodu Gondo, after receiving a tip-off he had helped some drug dealers avoid charges.

As they investigated, they caught him on a wire tap admitting that he “sold drugs” too, and as the probe widened, the corruption and abuse they started to find within the unit was staggering.

One officer was said to have kept “two duffel bags at the ready with gear including black ski masks, a grappling hook, a sledgehammer and a machete” to steal money from people they believed to be drug dealers carrying a lot of cash.

The series has been a huge hit
(

We Own This City)

They also carried fake weapons to plant on suspects in case they shot an unarmed person, and would re-sell the weapons and drugs that they stole to criminals.

In one instance, revealed in court, officers took a man’s house keys, found out where he lived through police databases, and went to the house where they found drugs and a safe with $200,000 inside.

They took $100,000 from the safe, then filmed themselves pretending to open the safe for the first time, to cover up the crime.

And in July 2016, officers stopped and arrested a couple who had been leaving a home improvement store, even though there was no evidence they had committed a crime.

When they found out that the couple had $40,000 in a house outside the city, they went to the house and scoured the property for cash, taking $20,000.

As depicted in the new series, eight of nine ex-officers in the unit were charged
(

During the Baltimore riots after the police killing of a 25-year-old black man called Freddie Gray in 2015, one officer allegedly stopped a looting at a pharmacy, only to take the stolen drugs himself, give them to a drug dealer and split the proceeds.

In another case, cops found a gun and a kilo of cannabis in a search, then sold the drugs and firearm back onto the street.

As depicted in the new series, eight of nine ex-officers in the unit were charged.

The two others – Daniel Hersl and Marcus Taylor – pleaded not guilty but were convicted in 2018 after four of the others agreed to testify against them.

Some of the officers described in court how they would drive fast toward groups of people in the street and slam on the brakes, before chasing and detaining anyone who ran away – admitting it could happen as many as 50 times a night.

During their testimony, officers also admitted to putting illegal tracking devices on the cars of suspected drug dealers so they could rob their homes and sell any guns or drugs they found.

Hendrix testified how the square would regularly do “sneak and peeks” – going into a house without a search warrant – “to see if there was anything worth taking”.

And Rayam claimed that after Jenkins took over the squad in September 2016 “the robberies increased a lot more. Pretty much any individual that we came across, if they had large sums of money, it was taken.”

He admitted netting at least $200,000 from selling drugs confiscated from dealers and users.

One witness, Donald Stepp, who admitted selling drugs for Jenkins, said they sold at least $1million worth of narcotics and said the GTTF was “a front for a criminal enterprise.

“It was obvious to me, when I’m taking millions of dollars worth of drugs from the Baltimore Police Department and selling them, that this is not a normal police department.”

The cops also admitted faking overtime, taking home hundreds of thousands of dollars in unearned pay. One took a month off to remodel his home and was still paid, while another claimed overtime while on vacation in Myrtle Beach, South Carolina.

All men were sentenced to between seven and 25 years and the GTTF disbanded. All remain behind bars, apart from Hendrix and Ward who received the shortest sentences after they cooperated closely with the investigation.

We Own This City is on Sky Atlantic now
(

The nearly 3,000 cases that the eight officers were involved with have also been called into questions, potentially allowing people previously convicted of crimes to be freed because the evidence is no longer reliable.

Earlier this year, an independent investigation into the scandal found that police trust in Baltimore will take years to recover.

“It took decades for the cancer of corruption to spread as widely as it did and to sink its roots so deeply into Baltimore Police Department,” the report said. “It will take years for BPD to demonstrate, in both words and deeds, that it has zero tolerance for corruption and misconduct.

We Own This City is on Sky Atlantic now.