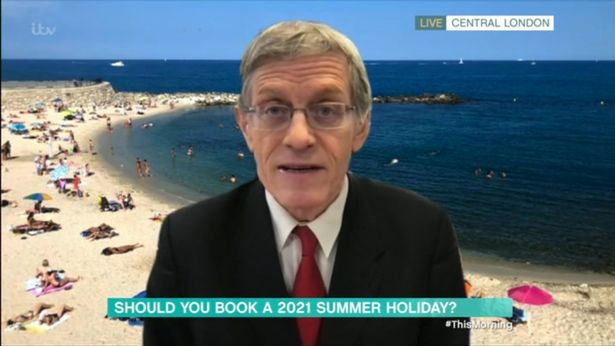 This Morning’s travel expert Simon Calder has revealed he is not returning to Wales after locals branded him “a maggot”, “a worm” and told him to “f*** off”.

Simon had recommended on the ITV show that people visit places including Gwynedd and Ceredigion in Wales, as well as Belfast and Edinburgh, as lockdown loosens.

But this sparked fury in the local areas, with many residents angered by the prospect of tourists visiting their towns and spreading Covid.

The counties of Ceredigion, Gwynedd, Powys, Anglesey and Pembrokeshire are currently free from lockdown restrictions, meaning people from England are able to visit.

He added: “The hundreds of people I inadvertently angered may be glad to hear that I have no further plans to book a stay in Wales.

“I intended to inspire travellers to enjoy, responsibly, a part of the UK that is rich in wonders, and hoped their visits would in turn support local businesses.”

He included some of the vicious messages he received, writing: “Worm!” emailed Kenneth Pedrick of Cardigan. “Why, in God’s name, are you sending the English (unbidden by anyone but you) out to the west coast of Wales to infect us with the virus when it’s just about the only place in Britain left uninfected, you maggot?”

“Dion Humphreys from Porthmadog wrote: “Absolutely f***ing knob there’s a reason parts of Wales are going in to lockdown, we don’t want you lot bringing more cases to Wales. Now f*** off and stay in England.””

Simon revealed he was also called “scum” and an “irresponsible idiot”, and said he has actually responded to some of them.

He concluded: “Anyone who chooses to offer their views in the media must be open to a robust response. I take criticism on the chin and seek to learn from it. Never, though, have I encountered such intense abuse as my well-intentioned remarks triggered this week.

“The respondents may count the effect of their combined reaction as a great success. I wish them well.”