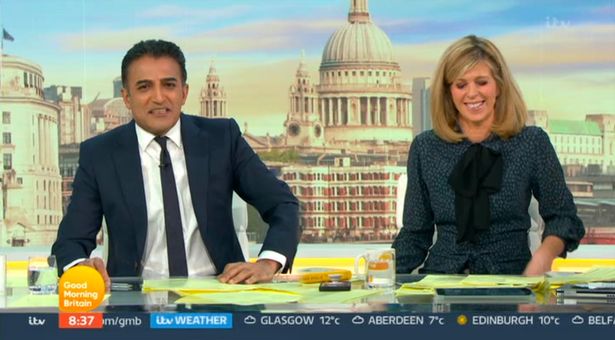 Good Morning Britain’s Dr Hilary Jones suggested a temporary discouragement of close contact, such as handshakes and hugs, should be considered amid the coronavirus pandemic.

The doctor said that some physical contact such as kisses on the cheek while the virus was still highly transmissible was “asking for trouble”.

But hosts Adil Ray and Kate Garraway were soon left backing the discouragement of close contact, after learning some truly horrifying statistics about hand washing and hygiene.

Author Ella Al-Shamahi and comedian Stephen Bailey were guests on GMB on Wednesday, debating whether hugs and handshakes should be banned altogether.

Viewers had shared their thoughts via a GMB Twitter poll, with 81 percent of viewers saying they should not be banned.

She said of handshakes: “I agree with Dr Hilary, they do pass on germs and we definitely shouldn’t be doing it right now.

“I mean some of the statistics are really gross on them, like globally only 19 percent of people actually wash their hands after a number two.”

Adil suddenly shouted out: “Ohhh,” as Stephen quipped: “This is why I don’t touch people.”

Kate then joked: “Ella, I think we might have just flipped those statistics around with that sentence, everyone is gonna be voting the other way!”

Adil shouted: “Crikey, almighty,” as he and Kate proceeded to pull a series of faces of disgust over the comment.