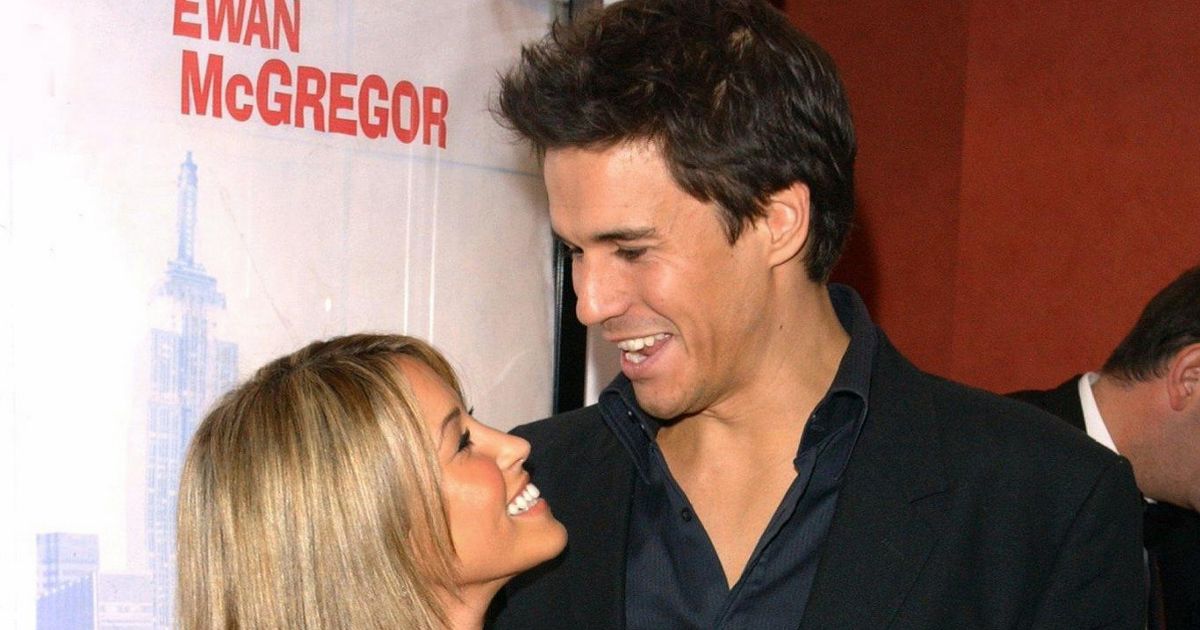 Former S Club 7 star Rachel Stevens recently opened up about her marriage to her childhood sweetheart, after previously being engaged to Hollyoaks actor Jeremy Edwards

Rachel Stevens was just 19 when she suddenly became one of the biggest stars in S Club 7.

Now as she celebrates turning 44, we’ve looked back at her amazing journey – which saw her sell 16 million records with the group, before embarking on a solo career.

But the public was just as hooked on her romantic life as her impressive musical talent – and avidly followed her romance with actor Jeremy Edwards, 51.

The couple got engaged after a year and a half – with Jeremy asking Rachel for her hand in marriage on Valentine’s Day 2002 over a romantic meal at The Dorchester.

Rachel was over the moon – after previously admitting she’d fancied her fiance since the first moment she saw him appear on screen as Kurt Benson in Hollyoaks.

Rachel and Jeremy were offered £2million for wedding photos

“I really didn’t have a clue he was going to do it and am thrilled to pieces,” she said in an interview at the time.

But tragically Jeremy’s life was blighted by tragedy following the awful death of his Holby co-star, Laura Sadler, who plunged 40 ft to her death from a balcony while watching the sunrise at her boyfriend’s home in Holland Park, London.

The 22-year-old actress sustained massive head injuries and died in hospital five days later, leaving Jeremy, then 31, devastated at the sudden loss of a close friend.

“Everybody in the cast is completely devastated and is asking the same question, ‘Why her?'” he told the BBC.

“You couldn’t meet a sweeter, nicer, more wonderful girl. She was the kindest person and even actor friends of mine who did just one episode with her are mortified. She was just the loveliest little thing.”

He struggled to cope, turning to alcohol, which affected his relationship with Rachel.

Rachel and Jeremy Edwards got engaged after 18 months
(

The pair split after a tough few months
(

Speaking candidly, he told Heat magazine: “It was a tough time for me. After Laura’s death I got really messed up. I was drinking a hell of a lot and got seriously depressed.

“It really shook me up. Losing such a close friend pushed me off the rails and sadly Rachel got caught up in my mess.

“It was at this point she confronted me about my problems and we agreed to have a break.”

After a month of no communication, Jeremy said he realised what his actions were ‘making [him] lose,” and tried to rekindle their relationship.

“Rachel means the world to me. I needed a serious reality check and that’s what I got,” he added.

However, wedding plans were delayed, with Jeremy stating he needed to “grow up a bit”, while Rachel was kept super-busy with S Club 7.

The pair then split in 2004, with Jeremey later expressing regret at losing out on the £2million they were offered for photographs of their wedding.

Speaking on the Soap From the Box podcast, he said: “We were offered stupid amounts of money to sell our wedding photos, honeymoon photos and our first born, and I turned it down. I just thought, ‘This is ridiculous’.

“I wish I’d done it. I could’ve made a s***load of money and had a bit more privacy. I’d be living in The Bahamas or something.”

But Rachel has since found love with her childhood sweetheart who she later married and had children with.

In a new podcast, Rachel spoke fondly of her partner Alex Bourne, 44, whom she married in 2009 in a lavish Mayfair ceremony, after randomly’ bumping into him repeatedly.

They first met and dated when they were just 12, but drifted apart during their teenage years and split.

On Roxie Nafousi’s The Moments That Made Me podcast, she told how their chance meetings felt ‘like they were being pulled back to each other’.

‘Years and years later, I was in Selfridges randomly and he walked in and we bumped into each other.

‘We were both in our late 20s and weirdly he said as he was walking in, I know I’m going to see you, he knew he was going to see me…’

She added: ‘It was just lovely to see him as an old friend and from that moment on we kept randomly bumping into each other.

‘His relationship with his girlfriend ended and then I went off to LA and he was an actor at the time so he came out to LA, too.

‘Then we rekindled our relationship again!

‘So, it was quite a random meeting and then just sort of randomly bumping into each other it was like we were being pulled back to each other.’

She explained: ‘It was just lovely to see him as an old friend and from that moment on we kept randomly bumping into each other.

‘His relationship with his girlfriend ended and then I went off to LA and he was an actor at the time so he came out to LA, too.

‘Then we rekindled our relationship again!

‘So, it was quite a random meeting and then just sort of randomly bumping into each other it was like we were being pulled back to each other.’

Their wedding was held in posh London hotel Claridge’s and Rachel walked down the aisle to her own S Club 7 hit ‘I’ve Never Had A Dream Come True’.

The bride and groom laid on a spectacular day for their guests, including ice sculptures, orchids, grand pianos and a ballroom covered in silk.

The happy couple have since welcomed two children – daughters Amelie, 11, and Minnie, eight.