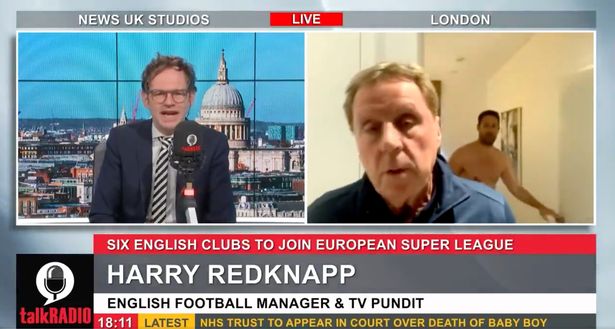 Jamie Redknapp was left red-faced when he walked into the background of an interview his dad was giving — topless.

Harry Redknapp, 74, was doing a video chat interview with talkRADIO about the new European Super League, but it seems Jamie wasn’t aware of the chat.

The moment left viewers users in stitches when talkRADIO shared the clip on Twitter, with one calling it “brilliant”.

Redknapp senior appeared to be talking to the presenter Mark Dolan in the hallway of his house when Jamie, 47, appeared.

Jamie stopped in his tracks, looking shocked that his dad was currently live on air.

“Oh what a treat,” another said.

Harry was on the show to talk about the highly controversial Super League.

The new league will see the six biggest English teams compete at the highest level of European football regardless of their Premier League position the previous season.