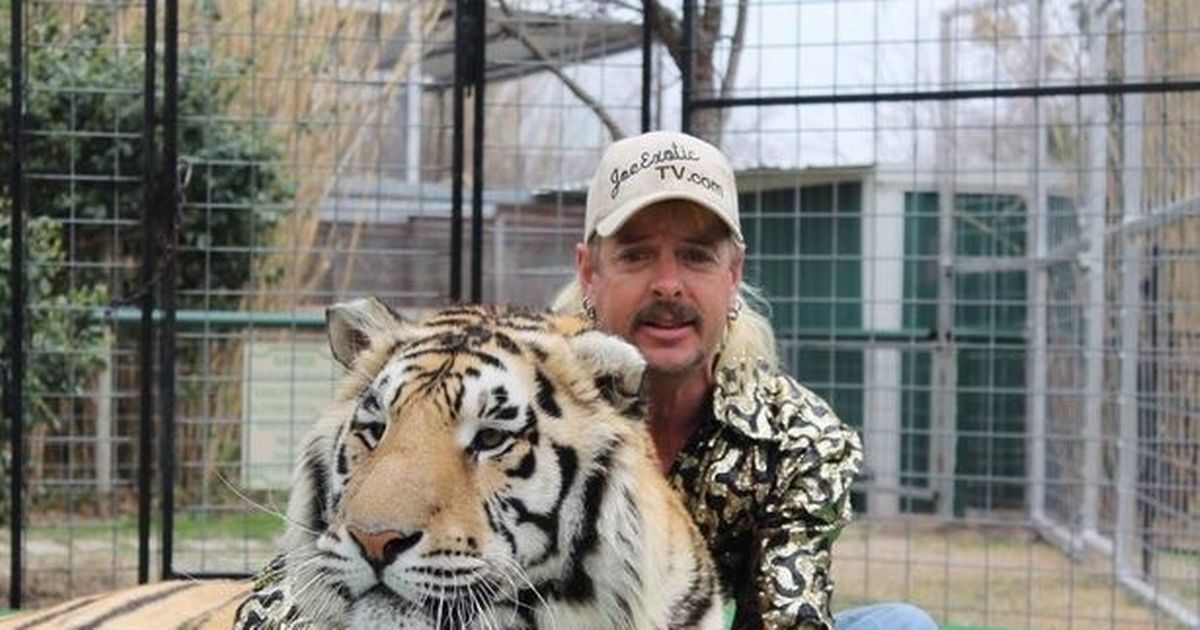 Tiger King left the world speechless when it aired in lockdown 2020, introducing us to characters from the quirky to the bizarre and unforgettable Joe Exotic, Carole Baskin and Don Lewis.

Each episode was more wild than the last as Exotic, whose real name is Joseph Maldonado-Passage, was accused of killing his own tigers and hiring a hitman to kill Big Cat Rescue sanctuary owner Carole.

He claimed she killed her husband Don Lewis and fed him to her tigers, something she has denied.

Exotic lived in a throuple marriage, ran for governor, embarked on a pop career, and was eventually handed a 22-year prison sentence for attempting to facilitate the murder of his nemesis Carole, as well as a string of animal cruelty charges.

Meanwhile his employees, one of whom was missing an arm and another both his legs, were just as fascinating.

But while viewers found the show baffling and hilarious in equal parts, it also depicted heartbreaking tragedies, not least of all the deaths of the innocent older tigers who were slaughtered to make space for cubs, which drew in the big bucks.

As the highly-anticipated second series of Tiger King landed on Netflix this week, let’s take a look back at some of the show’s saddest and most gruesome moments.

Saff lost his arm after being mauled by a tiger

Joe Exotic’s Greater Wynnewood Exotic Animal Park worker Saff featured in one of the most shocking moments of the Netflix series when his arm had to be cut off after being mauled by a tiger.

He was attacked when he put an arm through a cage and a big cat tried to rip it off, and as Saff tried to pull the arm out, the skin was ripped by the metal on the cage.

Saff was offered the opportunity of either an amputation or two years of reconstructive surgery, and he opted for the amputation.

Asked whether he watched the mauling footage back, Saff said: “I have over and over, yes sir. There was a time and place we actually used it as a safety video.

“We didn’t have any further conversation than this should be the one thing people need to see before they decide this the career move they need to make.”

Saff was in hospital for seven days in total, returning to work just five days after the amputation.

“I saw how much they blew it up into this horror story, I felt like the best thing to do was get back to work to set things right,” he said, explaining he didn’t want the tigers to suffer because people panicked that the park wasn’t safe.

In a recent interview on Lights Out With David Spade, Saff was pragmatic and said the day of the accident was a moment of “complacency”.

The tiger which attacked Saff was not put down but moved off the park and no longer interacted with the public.

John Reinke lost his legs after a horror zip-lining
(

Zoo manager John Reinke suffered one of the worst accidents to happen to the Tiger King cast – but it wasn’t what people initially assumed.

Visitors at the park thought the reason he had no legs was because tigers bit them off, but he’d actually lost them after a horrific zip-lining accident.

“A lot of people think tigers took my legs, no, it actually happened from a zip line accident,” he said in the documentary.

“I fell 50 feet, landed on my feet, crushed my feet, broke my hip, broke my back, tore all my insides up. I was paralysed from the waist down, but I could move a big toe, and that’s when I said, ‘I can do this.’

“So I took it upon myself to learn how to walk.”

But walking around the zoo “on bone” for 12 hours a day, seven days a week, meant John ended up losing his feet.

He insisted he didn’t blame the zoo, only himself for not allowing his feet to recover properly.

“Now I’ve just got these cool-looking legs,” he added, gesturing to his colourful prothetic legs.

He opted not to file a lawsuit against the company he was working for when the zip-lining accident occurred, but he claimed the owners of the organisation later won $16million in a Texas lottery.

Despite their winnings, John didn’t receive any payout for his accident, nor did he pursue any.

He explained: “Back then you didn’t sue your friends, you know, and they were friends of mine. They said they’d take care of me.

“Anyways, I’m alright. I take care of myself.”

Months after Tiger King was released, another chilling accident befell an employee at the tiger parks – and this time it was Carole Baskin’s sanctuary.

Volunteer Candy Crouser, 69, almost lost her arm after she broke protocol by sticking her arm into a tiger named Kimba’s cage.

A statement from the sanctuary explained that Candy, who had worked at the sanctuary for five years, had arrived for feeding to find that the tiger was “locked in a section that was away from where he was usually fed”.

She reached inside to unlatch a door, and that’s when the tiger “grabbed her arm and nearly tore it off at the shoulder”.

The statement added: “Candy said she just wasn’t thinking when she reached in to un-clip [the door].”

Shocked bystanders used a belt as a tourniquet and placed ice on Candy’s arm to try to save it, before ambulance workers arrived and rushed her to hospital.

The organisation added that her arm had been broken in three places and that her shoulder had been “badly damaged”.

They said Kimba was being kept in quarantine for 30 days as a precaution, but that he was only behaving “normally” due to “the presence of food and the opportunity”.

Candy, who was still conscious after the attack, “insisted that she did not want Kimba Tiger to come to any harm for this mistake”.

During a Loose Women appearance shortly afterwards, Carole said it appeared the surgeons were able to save Candy’s arm.

Joe Exotic’s husband accidentally shoots himself in the head

One of Exotic’s two husbands, Travis Maldonado, accidentally killed himself in 2017.

Travis was just 23 when he shot himself in the head in front of his colleague, whose horrified reaction was shown in Tiger King as the gunshot wound occurred off-screen.

Exotic claimed in a news conference that Travis had been fooling around with his Ruger pistol in the gift shop at the GW Zoo, and didn’t believe it would fire as he had taken the magazine out.

But when he tried to demonstrate that to other staff members, he actually shot himself in the head.

In the episode covering Travis’ death, Exotic’s political campaign manager Joshua Dial, is seen on CCTV gasping in horror after the gun goes off.

“Travis came into the office and started complaining to me,” he recalled. “Travis was sitting underneath the camera but it was pointing directly at me.

“He complained that he was a prisoner, that he was never allowed to leave the park, he wasn’t allowed to get a job, all this was true, and frankly he was upset that he didn’t have enough pot.

“He’s always pointed guns at people all the time out there at the park. Sometimes he’d wake you up pointing a gun at you, he’d done that to me on multiple occasions, so he had done that to me again in the office that morning and said, you know, ‘Freeze motherf**ker!’, which is just what he did.

“And he said, ‘Oh man, this is a Ruger, there’s no clip in it, and you know a Ruger won’t fire without a clip.’

“I was sitting in a chair looking at him when he put the gun to his head.”

CCTV images show a flash of light just off camera, and Joshua jumped and held his hands up to his face in utter shock as he sat frozen in fear.

Joshua said he thought it was a joke because Travis was such a prankster.

He added: “It’s not like on the movies, I knew he was dead the second he pulled the trigger, but at the same time I didn’t.”

Exotic’s Head Zookeeper Erik Cowie died at the age of 53 in September.

He was found dead in a friends bedroom in New York City, TMZ reported at the time of his passing.

Reports claimed that there was “nothing suspicious about the death” and “no drugs were found on the scene,” and the outlet later revealed the NYC Chief Medical Examiner ruled Erik’s official cause of death as acute and chronic alcohol use.

The medical examiner also told the outlet they were classifying the manner of the reality star’s death as natural.

Erik had testified at Exotic’s trial where he alleged older tigers were shot and killed at his zoo, and he admitted he helped put the animals down for no good reason and it haunted him to this day.

He also starred on the reunion episode, The Tiger King And I, and made it clear that he was not a fan of Exotic’s and was pleased he was in jail.

Asked if he thinks Exotic should be released, Cowie said: “No. Not no, but f*** no.”

He added, with a laugh: “Twenty-two years doing federal time – that guy’s gonna die in there. Good riddance.

“I am pretty sure they don’t have Netflix in there so he won’t get to see [Tiger King].”

Upon hearing of Erik’s death, Exotic shared no sympathy for his former colleague.

The former zoo owner, who is battling prostate cancer, said: “Never wish evil upon anyone else. God is watching.”