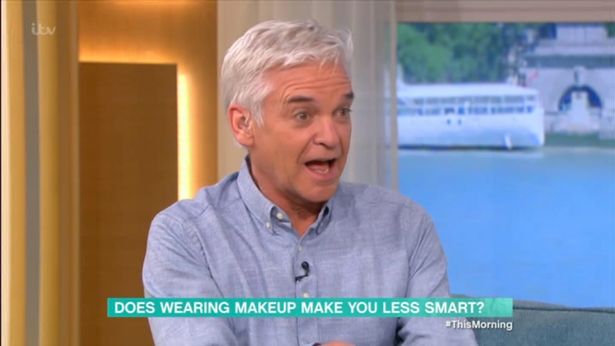 Phillip Schofield did not hold back on Monday’s This Morning when the conversation turned to Matthew Wright’s growing ponytail.

Matthew, 55, appeared on the ITV show to discuss the weekend’s headlines with hosts Phillip Schofield and Rochelle Humes.

Towards the end of the chat, Phillip mentioned a recent study that was conducted which found that “women who wear too much make-up are seen as less intelligent by both sexes, and more likely to have casual sex”.

Shocked at the study, Matthew asked: “Do people think I’m dirty because I wear make up?”

Fellow guest Camilla Tominey couldn’t resist making a dig about Matthew’s air and commented: “Are you going to wear extra make-up with that ponytail?”

Admitting that he would chop it off for a good cause, Phillip quickly replied: “Oh listen, I’ll come up with one straight away!

Camilla then suggested: “How about the Duke of Edinburgh Awards?” as Matthew laughed.

“What a good idea! For the Duke go Edinburgh Awards we cut it off… next week,” Phillip added.

“No it’s yours to choose,” the dad-of-two continued. “We’ve all sat here and watched the damn thing grow!”

Later on in the show, Phillip revealed that they had run a poll on social media and a whopping 91 per cent of viewers said that Matthew should have his ponytail chopped off.