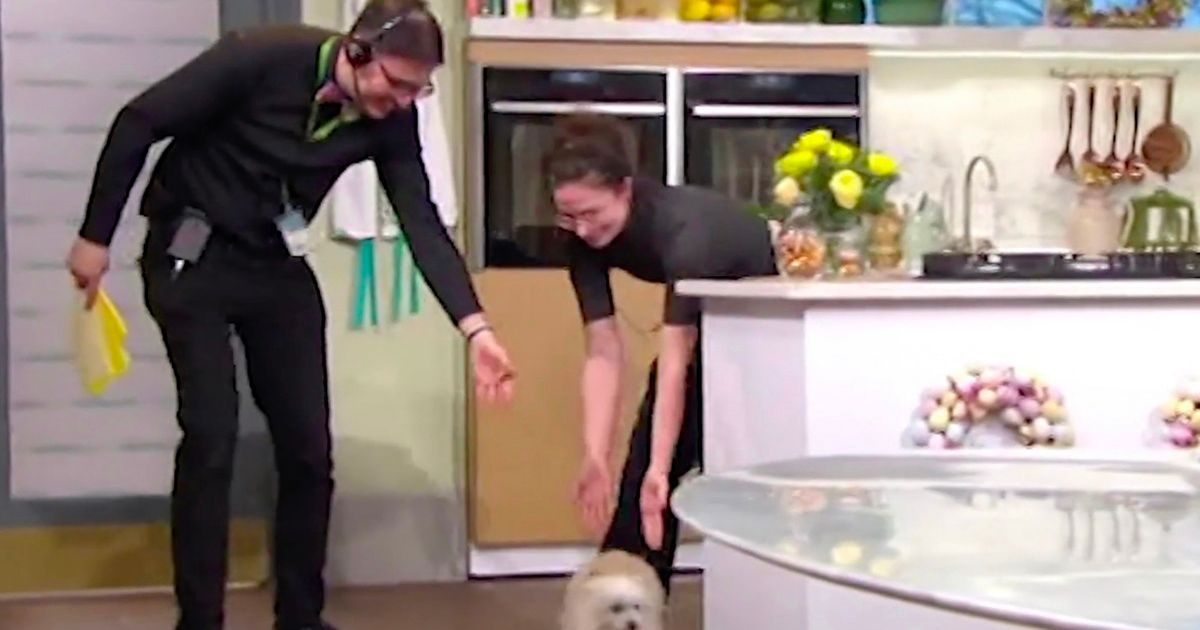 The This Morning studio was plunged into chaos on Wednesday morning, as a guest dog “did a runner” on the show in the middle of an interview with its owner.

Pup Missy went missing in the middle of the segment, as owner Beth Lee-Crowther told how she can talk to animals.

Host Josie Gibson, who is standing in for Holly Willoughby and Phillip Schofield alongside Vernon Kay, suddenly asked physic Beth what Missy was thinking as she had “done a runner”.

The cameras then panned to the kitchen area, where Missy had disappeared behind the counters, where chef Ainsley Harriet’s food lay waiting for his cooking segment later in the programme.

Vernon was suppressing a cheeky smile as he said: “I’ll be honest with you, I’ll tell you what Missy’s thinking. Missy has dived into Ainsley’s chicken.”

Host Josie Gibson suddenly asked physic Beth what Missy was thinking as she had “done a runner”.
(

Missy’s owner Beth then admitted Missy is “very greedy” as This Morning studio staff were seen moving kitchenware around the pup as she wreaked havoc.

Vernon replied: “She’s not weed. Has she had the chicken? They’re frantically cleaning up.”

Laughing, he continued: “That’s absolutely brilliant. Just make sure Ainsley makes another casserole please, because I don’t want that one. She’s absolutely loving it. Having a whale of a time.”

The cameras then panned to the kitchen area, where Missy had disappeared behind the counters
(

Missy then sauntered back over to the This Morning sofa when she leapt onto her owner Beth’s lap as she explained that Missy is always on the hunt for food after she was adopted off the street.

Earlier in the programme, Vernon admitted he was left “tipsy” after a boozy segment on Tuesday, ahead of another drinks-filled section of the ITV daytime show.

The 47-year-old presenter made the admission at the start of Wednesday’s show.

The T4 presenter said he had been left “tipsy” at the end of Tuesday’s shows after the pair were tasked with trying a range of hot cross bun flavoured drinks in the lead-up to Easter.

Josie and Vernon were again faced with a boozy segment the following day, for an Easter cocktail hour.

As Vernon ran down the schedule for Wednesday and got a glimpse of the chocolatey cocktails in question, Josie laughed as he said: “Just you wait until later. Tess, I’m getting in and going straight to bed.”