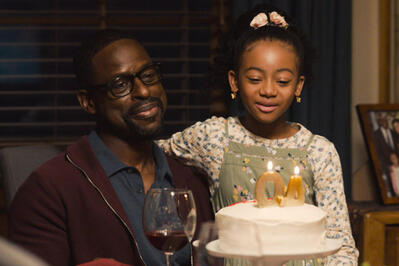 [The following contains spoilers from the Season 5 premiere of This Is Us. Read at your own risk!]

This Is Us returned on Tuesday night with a two-hour premiere that showed fans how the Pearsons are coping in the midst of the COVID-19 pandemic and set them up for another emotional rollercoaster of a year. The episodes initially picked up immediately where the Season 4 finale left off, with Kevin (Justin Hartley) finding out that Madison (Caitlin Thompson) was pregnant with twins. We then fast forwarded to him telling Kate (Chrissy Metz) and Toby (Chris Sullivan), which also revealed that Kevin and Randall (Sterling K. Brown) were still not on good terms after their blow-up fight at the end of Season 4. From there, the story skipped forward to the Big Three’s 40th birthday, which Kate, Toby, Kevin, and Madison decided to spend at the family cabin with Rebecca (Mandy Moore) and Miguel (Jon Huertas), who spent the summer quarantining there.

The premiere revealed why Rebecca had a memory episode while shopping for the twins’ birthday cake — she took allergy medication for a poison ivy flare up that blocked her Alzheimer’s meds from working — thanks to Randall showing up and piecing things together when Kate revealed that Rebecca was missing. The pandemic and the extra stress of George Floyd’s death only served to deepen the schism between Randall and his family as he struggled to explain why their sudden awareness that he traveled through the world differently as a black man was too little, too late.

However, in true This Is Us fashion, it was the final moments of the episode that set up where we’ll be going in Season 5. Throughout the premiere, we saw flashbacks to the night that Randall was born and his mother’s alleged overdose before William left Randall at the fire station. It turns out Laurel didn’t actually die that morning. She was resuscitated by paramedics after William thought she died and ran away with baby Randall before the cops could show up. The reveal has deep implications for what Randall’s life could have been if William had stuck around for 30 more seconds and sets up a lot of questions about what’s to come for No. 3 in his 40th year.

“We’re not going to kind of drag out a mystery like that one over multiple seasons, or anything. So there’s a pretty quick answer, and I think it will be found to be elegantly done,” series creator Dan Fogelman teased to press on a conference call about the premiere episode. “It’s one of our last things we’ve always bandied about, in terms of this being the area where we would reveal this information and dive a little bit into his mother’s story, his birth mother’s story.”

He went on to confirm that fans will find out sooner rather than later if Laurel is still alive in the present day and how she’ll come into Randall’s life as he continues to figure out who he is and what he wants. Revealing more about Laurel and who she is as a person will help inform what Randall does going forward.

“There’s definitely answers as to, ‘Is she still alive in the present day?’ And definitely answers as to kind of what happened after this from before. Honestly, who was this woman well before this moment, well before she met William. Where is she from? This woman who was Randall’s birth mother and hasn’t played a prominent part in our story thus far — who is she, where is she from, what is her story? That’s a big part of Randall’s journey this season.”

According to Fogelman, the plan was always to have Laurel be a bigger part of Randall’s story, the writers room just struggled to figure out when was the right time to really delve into her part of the story. As Randall is presently isolated from the rest of the Pearsons there is space to explore this part of his life that hasn’t really been questioned before.

“For us, Randall’s story, big picture, has always been a story of identity. He’s a man that’s constantly, like many people who come from different backgrounds, is kind of searching for who he is and where he’s from. It’s always been a part of his story, the story of his birth mother that we’ve never really shown out and told. I think for Randall, for that character, until he can get some answers there, and some kind of closure, it will be a final kind of step in him coming to terms with some of his own questions about his identity,” Fogelman explained.

We’ve always known that Randall has mom issues, but that became a point of contention between Randall and his therapist (Pamela Adlon) in Season 4. Now that Randall will be moving on and finding a Black therapist, it makes sense that he’ll start to delve into the issues surrounding how he feels about his adopted mother, now in contrast to his birth mother, in a way that hasn’t been explored on the show thus far.

“It’s something if you look back on the series that we’ve kind of always [layered] in, talk of where’s your mother? Why is your birth mother not a part of this narrative of your life? She’s this character who died in childbirth and you’ve never really looked into it. So this first half of the season is our opportunity to do this, and it kind of sticks with a plan of the when and the how and the why, in terms of Randall’s big picture arc,” he said.