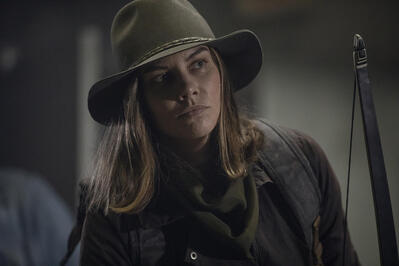 Something has happened with the current season of The Walking Dead that may be unprecedented in TV history. Due to the volatile circumstances resulting from the coronavirus pandemic, the AMC’s zombie drama’s tenth season will have three season finales. There was the out-of-necessity finale in the spring, “The Tower,” which was supposed to be Season 10’s penultimate episode; there was “A Certain Doom,” the intended finale, which aired as a standalone special on Oct. 4 due to the pandemic pushing completion of the episode back several months; and the last episode of the upcoming Season 10 extension, which will be called “Here’s Negan,” the same title as the famous Negan standalone issue of The Walking Dead comic.

The extension to the season, which was announced during The Walking Dead‘s [email protected]ome panel in July, will premiere on AMC on Sunday, Feb. 28 and consist of six additional episodes. The extra episodes will technically be part of Season 10, but they will functionally be a mini-season that will bridge Season 10 and Season 11, which will be the show’s final season and begin airing in late 2021.

AMC has announced the titles, descriptions, and guest stars for the new episodes, which are being produced under COVID-19 safety compliance protocols and will therefore tell more intimate character-oriented stories that require a smaller cast. Read on for everything we know so far about the Season 10 extension.

It will be made as COVID-safely as possible

In an interview with Deadline, showrunner Angela Kang said that the production planned its return to work around what a consulting epidemiologist told them they needed to do to make sure the workplace would be as safe and union-compliant as possible. That means upgraded HVAC, air scrubbers, “UV light things to zap germs on the stages,” and even a mobile testing lab onsite to get tests turned around as quickly as possible. She said that The Walking Dead has the benefit of having its own studio and backlot facility, so the crew has a greater level of control over their environment than many other shows are able to have.

The safety protocols will affect the storytelling

Kang said that the six episodes will be smaller and more intimate than usual due to compromises that had to be made in order to get back into production. “The epidemiologist was saying like, yeah, we can get back to work safely, but, we cannot have like 300 zombie extras crammed into a tiny space together,” the executive producer told Deadline.

That means that the episodes will be character-focused and have “kind of an introspective exhale sort of a feel,” according to star Norman Reedus. Kang added that there will be interesting dynamics between Negan (Jeffrey Dean Morgan) and Maggie (Lauren Cohan), who has returned after years away and will find a very different and much improved Negan than the one she left long ago, when she vowed to get revenge on him for what he did to her husband, Glenn (Steven Yeun). The episodes will also start to set up the final season, which will be two supersized, 12-episode halves and hopefully be made at full Walking Dead blockbuster capacity.

Maggie (and Cohan) quietly exited at the same time as Andrew Lincoln’s Rick Grimes in Season 9, but is now returning full time. She reappeared in the nick of time in “A Certain Doom,” saving Father Gabriel (Seth Gilliam) from a certain doom alongside a mysterious martial artist in a metal mask, who has not spoken or been formally introduced. (“He’s with me” is all Maggie said about him.) There’s no comics counterpart for this character, and no one is giving anything away about who he is.

Kang told Deadline that we’re going to find out a lot more about what’s been going on with Maggie in the time she’s been away. “She has seen some dark things on the road, and obviously, like when she comes in, she’s with this man in like a metal mask, and who is this fellow, what adventures have they been on? That’s all part of the story going forward, and it’s going to drive one of the major missions that we’ll start to see unfold,” Kang said. “It will lead us to meet some other interesting characters that will cross into some of the other major storylines of our series going forward.”

“A Certain Doom” introduced some other masked figures, too. Eugene (Josh McDermitt) and his traveling companions were surprised in a rail yard by soldiers in Stormtrooper-like suits with sophisticated weapons. Their appearance is identical to soldiers from a community from the Walking Dead comics known as the Commonwealth, a very technologically and culturally advanced city in Ohio, though in the show it seems that the location will be somewhere in West Virginia. The comic’s final arc deals with the Commonwealth.

“For people who don’t know the comic that are following with the show, I’ll just say that we’re about to get into a lot more story with these people,” Kang told Deadline. “I’ll also say, this deep into this new apocalypse, it should tell you right away this is like a heavily organized group, and how do you even keep white armor clean? What does that in and of itself like tell you about these people?”

New cast members have been announced

AMC announced that the new Season 10 episodes will feature appearances by some notable guest stars. Robert Patrick, best known for his role as the T-1000 in Terminator 2: Judgment Day, will play a character named Mays. And as previously reported, Hilarie Burton Morgan, Jeffrey Dean Morgan’s real-life wife, will guest star as Lucille, Negan’s ill-fated pre-apocalypse wife whom his barbed wire-wrapped bat is named after. Additionally, Cobra Kai‘s Okea Eme-Akwari will co-star as Elijah.

The official description is in

Here’s AMC’s logline for the return of Season 10:

“Last on The Walking Dead, we witnessed the fall of Alpha (Samantha Morton) and the end of the Whisperers War. The Kingdom had fallen, Hilltop was virtually destroyed, and Alexandria abandoned to prepare for final battle. Our survivors were trapped and separated from one another. Yet, when faced with almost certain death, they rallied together to fight, killing Beta (Ryan Hurst) and eliminating the threat of the horde.

“In these six new episodes, we find our survivors trying to pick themselves up by their bootstraps following the destruction the Whisperers left in their wake. The years of struggle weigh upon them as past traumas surface, exposing their more vulnerable sides. As they question the state of humanity, the state of their collective community, and the states of their minds, will they find the inner strength to persevere with their lives, friendships, and group intact?”

Episode synopses have been released

Maggie (Lauren Cohan) has returned with a story she is not ready to share, even when her past catches up to her. Negan’s (Jeffrey Dean Morgan) safety is at stake again. Daryl (Norman Reedus) and Maggie fight an unseen and unknown threat.

An adventure for Daryl and Carol (Melissa McBride) turns sideways when they come across an old cabin. It takes Daryl back to the years when he left the group after Rick disappeared as he relives a time that only the apocalypse could manifest.

Gabriel (Seth Gilliam) and Aaron (Ross Marquand) search for food and supplies to bring back to Alexandria. Small tragedies lead to bigger tragedies as faith is broken and optimism is fragmented when they are put to the ultimate test.

Eugene (Josh McDermitt), Ezekiel (Khary Payton), Yumiko (Eleanor Matsuura), and Princess (Paola Lázaro) are captured and separated. Princess struggles with memories of her traumatic past and tries to escape one way or another with the help of Ezekiel.

Daryl and Carol come to a fork in the road and head their separate ways. Each going into their own type of survival mode, the easiest of challenges become much harder. Will their individual journeys be the tipping point needed to mend their friendship or is the distance between them permanent?

Carol takes Negan on a journey, hoping to minimize the increasing tension. Negan reflects on the events that led him to this point and comes to a conclusion about his future.

You can watch a clip from a virtual table read

AMC released an inside look at one of the episodes, “One More,” that features Ross Marquand, Seth Gilliam, and Robert Patrick, and is narrated by Josh McDermitt.

The Walking Dead will return Sunday, Feb. 28 at 9/8c on AMC. All episodes from the season will be available for early streaming the Thursday before their linear premiere on AMC+.