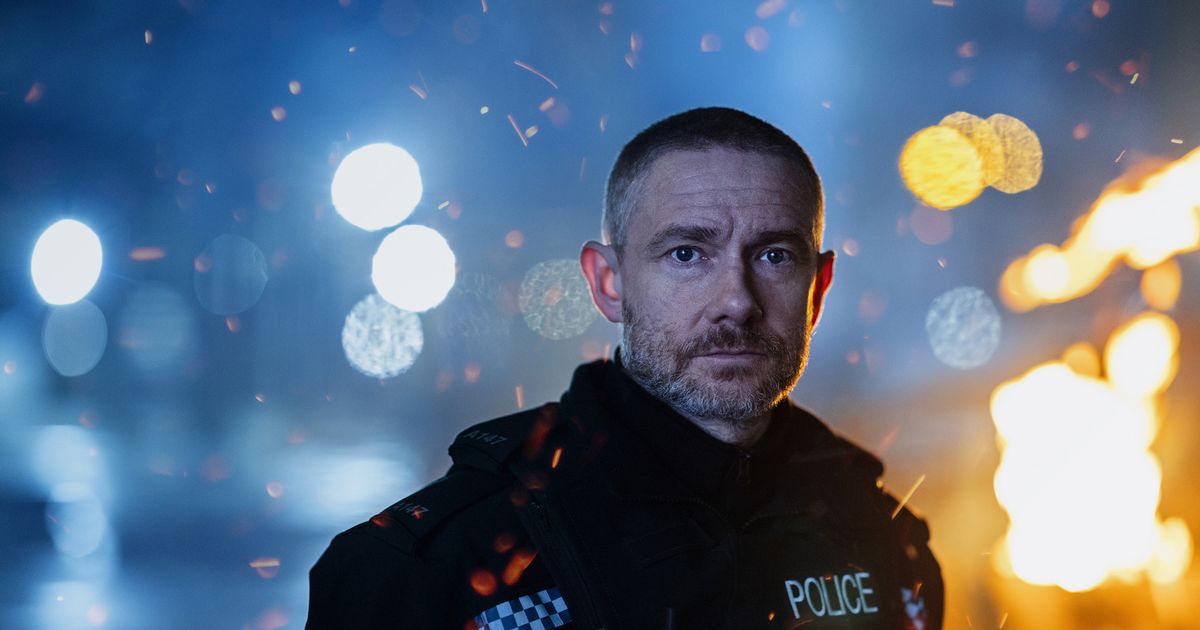 The Responder: Chris Carson reads to his daughter

BBC viewers tuning into the first episode of new drama The Responder on Monday evening were left torn over Martin Freeman’s Scouse accent.

Martin, 50, stars as a police response officer struggling to keep a grip on his mental health and marriage who comes to the aid of a young heroin addict whom his friend intends to harm.

His character Chris Carson is unaware that his colleagues are watching him, convinced that he is corrupt.

While intervening in a domestic dispute between his neighbours, the pressure he is under proves too much, causing him to lash out.

The screenplay for The Responder was written by a real former police officer who was inspired to share his experiences after suffering from a nervous breakdown due to the stress of the job.

Tony Schumacher patrolled the streets of Liverpool as a first responder, witnessing the results of horror crimes, people pushed to their limits and communities destroyed.

Therefore, Martin was tasked with playing the role using a Liverpudlian accent – but some viewers weren’t overly impressed with it.

“Not liking the accent far too strong and breaking in places, just weird…#TheResponder,” one person posted.

Martin, 50, stars as a police response officer struggling to keep a grip on his mental health and marriage
(

Another said: “Martin Freeman in a Scouse accent sound’s weird lol. Close your eyes and all you can picture is Stephen Graham doing the role! #theresponder.”

Someone else admitted: “Cannot cope with the accent. Cannot watch it. #TheResponder.”

However, other viewers thought that Martin was doing a great job and praised him on social media.

“Martin freemans scouse accent is better than mine in #theresponder and I’m a bloody scouser,” someone posted.

Another said: “Martin Freeman’s Scouse accent in this is absolutely spot on #TheResponder.”

A third person added: “Just putting it out there, Martin Freeman has one of the best scouse accents I’ve ever heard a non scouser have #TheResponder.”

It comes after Martin confessed he spoke to himself in a Liverpudlian accent for a year and a half in preparation for The Responder.

Having filmed the five-part series on the streets of Liverpool, The Hobbit star revealed he ‘followed his ear’, having spent a lot of time speaking to residents of the city.

Martin told Metro: “I walked around for a year and a half, occasionally just talking to myself in Scouse. Even though you’re not always the best judge of your own thing, I do trust my ear.

“If I say something, I know when it sounds off. I got very, very exact about that stuff. You have to be, because if I don’t do it well, it’s a terrible accent to get wrong.

“There are some accents where you don’t want to be in that city among the inhabitants of that city making a balls up of it!” he added.

All five episodes of The Responder are available to watch on BBC iPlayer now.