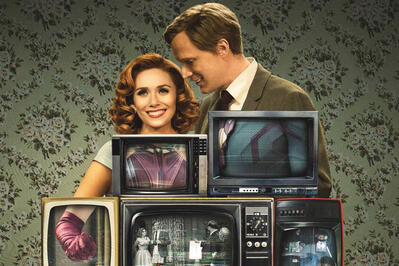 New Year’s Eve was a little different this year, and not just because “Auld Lang Syne” was sung over Zoom instead in the arms of friends and family and your traditional tuxedo/ball gown outfit was replaced with sweatpants and the T-shirt you’ve been wearing for three days. Flipping the page to 2021 was a relief after the eternal darkness that was 2020, and optimism fills our hearts as we arbitrarily pin all our disappointment and fears on a time-measuring system created 500 years ago.

But there is something to be legitimately optimistic about: the 2021 TV year. We’ve put together a list of shows that we’re most excited for in 2021, and there are some great ones. Comedies, sci-fi epics, adaptations, and more are all arriving over the next 12 months, in what could be one of the best years of TV ever.

Note: With the coronavirus pandemic delaying production on several shows, several of our picks below come with an asterisk, as delays could push premiere dates past 2021.

Premieres Thursday, Jan. 7 on NBC
In recent years, NBC’s must-see Thursday night sitcoms have been coming in bits and pieces rather than a full-fledged block, but two people who have been huge parts of NBC’s glory days of yore — Cheers‘ and The Good Place‘s Ted Danson and 30 Rock‘s Tina Fey — are hoping to build a foundation for a new one. Danson plays a rich dude who runs for mayor for a very sitcommy reason — to impress his teen daughter — and wins before he really knows what he stands for. Fey and her 30 Rock co-founder Robert Carlock have a knack for writing good workplace comedies with fun ensemble casts, and the subject of local government could make this the next Parks and Recreation, if Leslie Knope wasn’t so nice.

Premieres Friday, Jan. 15 on Disney+
It’s been over a year since Disney+ launched in November 2019, and we’re finally getting our first Marvel Cinematic Universe series at the beginning of 2021. But it looks like it will be worth the wait. Set after Avengers: Endgame and markedly different from everything else you’re used to in the MCU, WandaVision follows Wanda/Scarlet Witch (Elizabeth Olsen) and Vision (Paul Bettany) as they live their ideal life in suburbia, their life like a classic TV sitcom. But when things seem to be too much like a TV show, they begin to suspect something is up. This is going to be a big year for Marvel on Disney+, with fellow MCU shows The Falcon and the Winter Soldier (March 19), Loki (May 2021), Hawkeye (late 2021), and Ms. Marvel (late 2021) all scheduled to be released in 2021. [Everything we know about WandaVision]

Premieres April 2021 on Netflix
You know the drill: If someone is making a TV adaptation of one of our favorite fantasy novels, we’re going to be jazzed for it. Shadow and Bone takes two of author Leigh Bardugo’s book series — Shadow and Bone and Six of Crows — and smashes them together for a new series that melds both storylines of a world at war with itself and the flesh-eating creatures that inhabit it. The heroine is a young orphan named Alina Starkov who discovers she’s in possession of a great power, which she uses to save her best friend. And because this is YA fantasy, you know there’s going to be some romance thrown in there. The cast is mostly made up of little-known actors, but Westworld‘s Ben Barnes has signed on to play General Kirigan, aka The Darkling. [

Series premiere 2021 (unconfirmed) on Showtime
In 2001, I kneeled before my bed and begged any divine power that would listen to bless us with a Halo TV show. So I take all credit that it’s finally happening, courtesy of Showtime and Awake‘s Kyle Killen. The adaptation of the insanely popular series of Xbox and PC first-person shooter games is likely to drop this year after what seems like eons of development, with Pablo Schreiber (The Wire) taking the role of protagonist Master Chief, a supersoldier built by the army to blast away aliens with the help of his onboard A.I. Cortana. We don’t know much about the show outside of some key casting, but this is no doubt going to be a big-budget action extravaganza, and with Killen writing, expect some great character storytelling about the ever-mysterious Master Chief. I’m so excited for this I’m crying.

The Lord of the Rings

Series premiere 2021 (unconfirmed) on Amazon Prime Video
2021 looks like the year that streamers and networks will throw a ton of cash at TV shows, and none will be more buried in money than Amazon’s epic adaptation of The Lord of the Rings. Amazon is reportedly spending a billion (BILLION!) dollars on the show, which already has a two-season order (and a five-season commitment), so there are no excuses for this not to be amazing (knocking on wood). It will be a prequel, set in the Second Age of Middle-earth before the events of the book and films, possibly showing Sauron’s rise to power. [Everything we know about Amazon’s Lord of the Rings TV series]

Series premiere 2021 (unconfirmed) on FX on Hulu
Finally, a show about a guy who sits in his chair watching TV all day and waiting for his grandkids to call. Or, it’s an adaptation of thriller author Thomas Perry’s 2017 novel The Old Man, which follows a retired intelligence officer who becomes marked for death and is pulled into the world he left behind. Jeff Bridges stars as the titular elderly fella, and from the quick looks at the teaser trailer, you will definitely want to stay off his lawn. John Lithgow and Amy Brenneman also star.

Only Murders in This Building

Series premiere 2021 (unconfirmed) on Hulu
Two thirds of the Three Amigos — Steve Martin and Martin Short — reunite for this comedy about true-crime-obsessed residents of an apartment building who find themselves involved in a murder mystery. Apparently Chevy Chase was busy, because the third star of the show is Selena Gomez, who also produces with Martin and Short. Martin and Short may be considered “old people” comedy by you millennials out there, but the two are fantastic together, recently going on a comedy tour as a duo and showing they still got it. Loser sleuths in way over their heads fits right into their shtick.

Series premiere 2021 (unconfirmed) on HBO Max
Pandemic shows may seem a little too on-the-nose these days, but the adaptation of Emily St. John Mandel’s acclaimed 2014 novel started back in late 2019 before coronavirus hit, making this miniseries more prescient than exploitative. The story follows the life of Kristen, a former child actor who faces a world brought to its knees by a swine flu epidemic that kills most of the world’s population. Mackenzie Davis landed the role of Kristen and the novel is an office favorite, but what we’re really excited for is that Hiro Murai, the visionary genius behind many of Donald Glover’s works including Atlanta, is directing the miniseries.