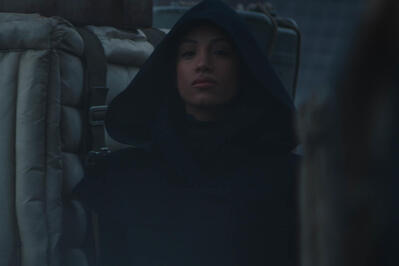 The Venn diagram of WWE fans and Star Wars fans got a big treat on Nov. 13 when Mercedes Varnado — better known in the ring as Sasha Banks — made her debut in Season 2 of The Mandalorian. Varnado plays Koska Reeves, a member of the Nite Owl unit of Mandalorians who are leading their own rebellion against The Empire under the leadership of Bo-Katan Kryze (Katee Sackhoff). For Varnado, getting the call to join such a legendary franchise was beyond her wildest dreams.

“It’s just the biggest thing that you can almost ever be a part of. I’m only used to wrestling. I’m used to just WWE,” Varnado told TV Guide over the phone. She recalled the moment creator Jon Favreau called her over FaceTime to ask her to join the franchise: “I go, ‘Ooh, is this real?'”

“I am still pinching myself, because I still cannot believe that I’m part of this incredible, incredible universe and incredible galaxy and family. The fans have just been nothing but incredible to me,” Varnado said.

Of course, Varnado wasn’t chosen for the role solely because she’s a Star Wars fan. The Nite Owls are just as fierce as the show’s eponymous hero, and Varnado’s extensive wrestling training came in handy right off the bat. She was proud to show off her skills.

“As you can see, after you saw me in the club, when I came in, I did the spinning draft kick, and that is a WWE wrestling move,” she explained. “I wanted to bring a lot of what you saw in the ring to what you saw in The Mandalorian, because I wanted my fans, the Sasha Banks fans, just to instantly know that that was me.”

Varnado’s time on set was not all rough and tumble. The wrestler-turned-space warrior also got to spend some time with everyone’s favorite infant alien, and she was as enthralled with The Child as fans on the internet are.

“It’s incredible to work with The Child,” Varnado revealed. “I couldn’t keep my eyes off The Child, because it’s just so incredibly surreal that something can look so real. It was so awesome. He is so legendary and the star of the whole set.”

On screen, things are more dangerous than ever for The Child and Mando (Pedro Pascal). Chapter 12, “The Siege,” set the masked crusader on a collision course with Imperial leader Moff Gideon (Giancarlo Esposito) after Mando discovered The Empire wants to use The Child’s blood for some ghastly experiments. Could the Nite Owls help Mando protect the child from The Empire once again?

“I honestly have no idea where they’re going,” Varnado said. She’s just as curious to find out where the story is going as everyone at home. “[Executive producer] David Filoni and Jon Favreau are so amazing at what they do. So I have no idea. I’m just gonna keep watching as a fan. I’m so excited as well, so we’ll see.”

New episodes of The Mandalorian premiere every Friday on Disney+.